Happy Women in Sci-Fi Day, y’all (we heard a rumour it’s today, but if not we’re making it so -fight us). Today we’re celebrating women who write science fiction, so we decided to ask some of our women science fiction authors to recommend to us the female authors who bring them joy, inspire them and stand as role models for aspiring women authors everywhere.

So without further ado, here they are!

For me, science fiction doesn’t get much better than Suzy McKee Charnas’ the Holdfast Chronicles. The first 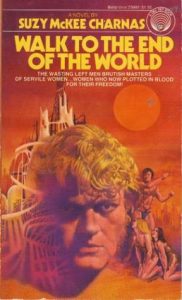 book, Walk to the End of the World, is a post-apocalyptic story of two young men who struggle to fit into the man-centered society created from the survivors of our own devastated world. It’s a place where old white men hold all the power and a rigid societal structure keeps young men in line. But it’s only through the actions of the third point of view character, the young men’s pack animal — a woman named Alldera — that the true horror of this civilization begins to emerge.

Yes. This is a future where women are pack animals. Where their hair is harvested for fur. Where to stay alive they secretly harvest each other’s breast milk to make cheese. And of course, it’s the kind of world where women stab each other in the backs to get what few scraps of freedom and power men will allow them.

Walk to the End of the World is one of those slow-moving ’70s novels that takes a while to get into, especially since it spends the first half heavily immersed in the politics of terrible people. But by the end, you’re so caught up in the world and in Alldera’s struggles that you’re more than ready for the next three books.

heart of the story centered around four men and two prettily-dressed women, it made a sort of sense.

Until now. Enter, among other powerful women, Rey. Enter General Leia. Enter Captain Phasma, whose role is not yet finished on screen.

Enter Delilah S. Dawson, who tore onto the scene with all the confidence and power and ambition of every Millennium Falcon pilot worth noting.

Phasma dives into what can only be termed as a badass character. Not only that, but the titular character is the franchise’s first real female villain: aggressive, brilliant, cunning… and flawed. Dawson wrote a no-holds-barred look into what kind of history turns a captive into the most powerful Stormtrooper, the most powerful woman, in the First Order, and it’s not pretty.

Through cunning lies and clever truths, Phasma details a contest of wills that peels back that shiny silver armor to show us who this arrogant woman really is. And like all the very best characters, she is everything. She’s violent and she’s thorough, merciless and brilliant. She’s virtually unstoppable, unkillable, and determined to survive the unsurvivable. She has secrets. She has fears. She will stop at nothing to hide them. And that depth is why Phasma deserves its place not just in the franchise, but right there at the top.

If your debut science fantasy novel includes self-aware robots and a genetically engineered virus that turns people into demigods, I am basically going to throw my money at you. Nicky Drayden’s near future thriller The Prey of 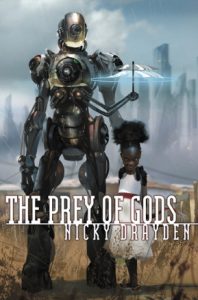 Gods takes place in Port Elizabeth, South Africa in the year 2064. Most people own a personal robot, wild dik-diks are creating chaos in the city, and a new street drug is transforming people into godlike animals.

Sydney, an ancient demigoddess (and skilled nail technician) is about to be replaced by Nomvula, a ten-year-old Zulu upstart with the ability to rain fireballs out of the sky. The two women clash—each drawing the source of her power from either benevolent rule or merciless cruelty. At the same time, a young teen grapples with how to fit traditions and family expectations into his exceptional life.

The world of The Prey of Gods rests in the intersection of magic and technology, where genetic engineering mingles seamlessly with folk tales from bygone days. Drayden gives us plenty of fast-paced action sequences but also lets us experience tender personal moments between her characters. The final battle is so outrageous—think robots versus demigods–that you won’t forget it for a long time. This is rollicking sci-fi fun with a big heart.

I love books that play with history, and I am especially fond of time travel that feels plausible and drops a modern protagonist into a historical setting that has been well-researched. 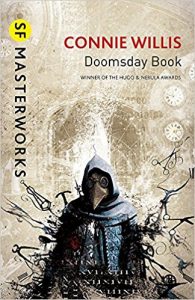 This allows a modern-day character’s perspective to intrude on past events in a way that not only gives us context, but attaches us to the past in a way we never could have seeing it through the eyes of that era’s characters alone.  One of my favorite examples of this is the Doomsday Book by Connie Willis, in which Kivrin Engle, a young historian specializing in medieval history, talks the reluctant time travel department at her university into sending her back to 1320 – a time period marked as too dangerous to visit.  Falling ill immediately after arrival, she is taken in by a family, and we are drawn into the lives of those around her, especially the two young girls who are dealing with challenges of growing up in this time period.Fair warning to those of you who know me as a fan of cheeseball comedy, normally averse to multi-Kleenex-box books: the Doomsday Book sets you up for heartbreak, and it delivers. (Though some parts are genuinely funny.)  If you want the fun side of this series, pick it up with To Say Nothing of the Dog, wherein time-traveler Ned Henry is suffering from a time-displacement illness and sent for a vacation in the Victorian Era – where he runs into Kivrin, the aforementioned dog, and a catbasket full of other problems.

It’s not enough to simply be an author in today’s marketplace. We must always write more, do more, be more. Fran Wilde is an expert at more, not only managing to write an impressive array of powerful stories over the last few 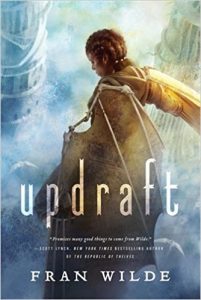 years but also finding new ways to connect, collaborate, and share insights into her creative process. In the Nebula-nominated short story Clearly Lettered in a Mostly Steady Hand, she writes about disability and makes it grippingly visible by subverting ableist norms. In her award-winning Bone Universe Trilogy, she writes about having and losing your voice and pitching it just the right way to rebuild. And stories in her Gem Universe are filled with facets to explore, growing more intricate with each new tale of jewels imbued with ancient magic. Equal parts poet and programmer, she’ll inscribe indelible words upon your heart, the algorithm still hard at work months later. She does all this while writing poetry, making art, tending her family, helming Cooking the Books, working as a technology consultant, and working behind the scenes to make our field more inclusive, integrative, influential. Fran Wilde has turned author life into high art, wielding her words and her storyworlds (plus the occasional pun) for the good of all of us.