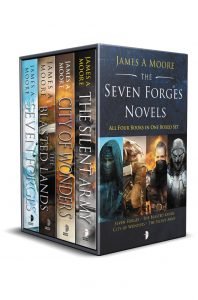 Listen up, fans of James A Moore‘s Seven Forges series – Seven Forges, The Blasted Lands, City of Wonders and The Silent Army –  our Jim has only gone and written himself a new short story, set in the Fellein Empire. The story takes place at the same time as events in The Silent Army, so if you’re a fan then you definitely 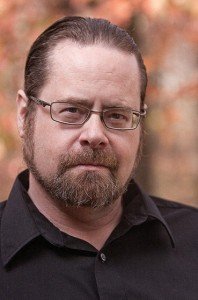 Exciting news! The king of grimdark, knight of fantasy, honorific of horror and president of podcasts James A Moore will be answering all of your questions in an AMA this Thursday, December 21!

Head on over to r/fantasy to ask Jim anything you’d like, including HOW he writes so many books, WHERE he does all of his scribbling and WHY for such a jolly man he has such a dark, dark 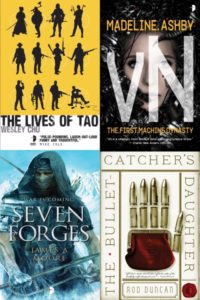 Spring: a time for new beginnings, new worlds and new stories. To celebrate the return of sunshine Barnes & Noble are slashing these fine series’ starts to just $2.99 from 18 – 24 April as ebooks!

Use the links below to load up your Nook and start reading: 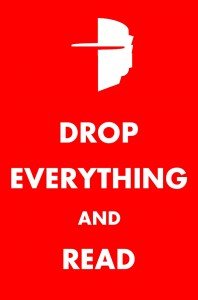 We’ve partnered up with Amazon.com for a flash sale on 12 April for Drop Everything and Read Day – a great day to sit down and read a book, or at least grab a book so you can read it later.

The amazing books below will be knocked down to $2.50 for the paperback edition, click the titles and covers to find them on Amazon.com. Snap ’em up before they run out,

Fancy getting your hands on a whole bundle of wonderful books?

Well if you do, you’re in luck! If you head on over to GoodReads, we’re giving away ALL the books in James A. Moore’s Seven Forges Series to celebrate the release of  his new book The Last Sacrifice, the first in The Tides of War series.

Amazing right? That’s 4 books for free! Although there’s a different book scheduled each week, this means you have four chances to win the whole series. Eeeeeek. Below is the date for each giveaway, plus synopsis for each book in the

There is no better time to start a new series than when your ereader proposes it to you.

From the 13-19 September you can get the first book in the massive epic fantasy series Seven Forges by James A Moore for just $1.99. Start something new here: Nook Start a New Series It’s getting to that time of year where the leaves change colour, the air gets colder and all you want to do is snuggle down on the sofa and read a good book.

Heh, who are we kidding, we always want to snuggle down and read a good book, but that’s by-the-by. New books are brilliant and Nook know this, which is why they’re holding a ‘start-a-series’ promotion on our lovely James A Moore’s Seven Forges, which will James A Moore, grade A material robot and author of the Seven Forges series (among many, many other novels) will be holding a signing tomorrow, May 7 at Jabberwocky bookstore in Newburyport, MA to celebrate the US release of The Silent Army, the fourth book in the series.

For those who have missed out on reading this epic fantasy so far, the night will When Tudor explorers returned from the New World, they brought back a name out of half-forgotten Viking legend: skraylings. Red-sailed ships

Our Robot Authors are out and about in force over the next couple of weeks, with signings across the US. It might be getting cold outside but hey, what could be a better reason for leaving your house than seeing your favourite author and munching on some nibbles? Nothing. That’s what.

Check below for signings, readings and Q&A spots for James A Moore, Carrie Patel and Patrick S Tomlinson. Various authors will also be attending World Fantasy Con this weekend but that’s a story for another post. When James A. Moore, author of the Seven Forges series, came to us with a synopsis for a new trilogy we caught him in a holding device and threatened him until he promised to stay with us for The Tides of War.  We’re happy to announce that James quickly caved from our various methods and The Last Tides, book number one in the trilogy, will be out in autumn 2016.

First though, James will be finishing his

We do love a good book cover at Angry Robot HQ, and today we’re delighted to share with you the stunning new cover for James A Moore’s hotly anticipated new novel, City of Wonders.

Thanks go to the brilliant Alejandro Colucci, whose work on James’ last cover, The Blasted Lands, earned him a Gemmell Award nomination.

James: “I have loved every cover that Alejandro Colucci has done! He is an amazing artist. That said, finally seeing  Swech illustrated, makes me very happy. The covers for all three of the books has been spot on and Swech is

We are delighted to have shared with you our recent re-signings and new author deals. There are two new author announcements to come very soon, but today we are thrilled to tell you that James A. Moore will be writing two more books in his Seven Forges series, following Seven Forges and The Blasted Lands. Not only that but the next instalment, entitled City of Wonders, will be released this November, 2015. More details on City of Wonders below. James is a wonderful member of our Robot Family and we are excited to have his  continued involvement with

It’s publication day at Angry Robot HQ and we have not one but two fantastic new titles for you: Craig Cormick‘s The Shadow Master and James A. Moore‘s The Blasted Lands, the sequel to Seven Forges. The Shadow Master is a witty, swashbuckling tale of families at war and features some of history’s most famous figures. It is brought to you by Australia’s award-winning Craig Cormick, who was wooed by Marc at Canberra’s Conflux in 2012. With assassination; ancient, impossible machines; and torture