IT IS ALMOST TIME. The Robot Army is mobilising and heading to FollyCon, in numbers greater than ever seen before.

That’s right, the legion will be out in force, and not only that we’ll be selling books, too! Drop by the dealer’s room Monday – Friday to pick up some wonderful novels and get yourself a pin badge! We’re also having a PAAAARTAAAYYY at 3PM on Saturday to launch Jeff Noon’s The Body Library and Patrice Sarath’s The Sisters Mederos. We’ll be giving away a free glass of wine with each book, and it cost an arm 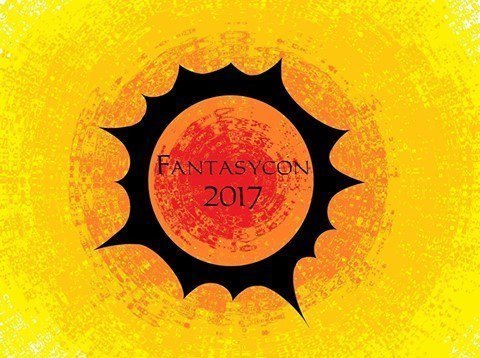 Angry Robot is coming to FantasyCon and we’re ready to party! Who’s with us? You? YOU? How about you in the corner, yeah you, holding all the books. Come and join us!

As usual, if this is your first con, you’re feeling a bit nervous or you just fancy sitting with some friendly faces, we’re more than happy to welcome you into our little gang, so look for the Angry Robot lanyards round our necks We’re getting back into con season on both sides of the pond. While Mike heads over to C2E2 over in Chicago, we in the UK are heading up to Manchester for Easter weekend to hang out at Mancunicon.

On Friday there will be an Angry Robot party in the Presidential Suite (aren’t we fancy?) from 20:30 – 22:30, so make sure to swing by and take full advantage of the (limited amount) of This weekend the now sold out FantasyCon2015 comes to Nottingham, and as it’s on Angry Robot’s home turf we don’t even have to fire up our teleportation devices to attend!

We have a vast array of UK-based Angry Robot authors coming along to the convention all cleaned, oiled and ready to mingle – we’ve ordered them to be on their best behaviour. If you’d like to say hi then make sure to pop along to

After the joy of GenCon over in the States, it’s finally time for the UK to get a bite of the convention apple, as Nine Worlds is happening this weekend in London!

We’ll be sending down a crack team of Robots to attend the con, set on chatting with you and reigning triumphant over every board game going. If there’s one thing that the Angry Robot horde love to do, it’s to crawl out of our writing holes and have a chat. Partially it’s because we need to see the light of day and socialise after a hard few months of writing, but also it’s because we love you guys. You keep us doing what we do.

So that’s why we’re all over the place this year at various conventions, exhibitions and festivals. Below is a list of where the we’ll be throughout 2015, so if you want to pop down and say hi, or you’re in the

First off, The Lives of Tao by Wesley Chu has made it into a few of your favourites piles, and was even voted into the top ten science fiction books in the Goodreads Choice Awards! Badass Book Reviews included it on their Best Science Fiction of 2013 list. My

David Tallerman‘s Easie Damasco tales came to a close with the October publication of  Prince Thief, and to mark the occasion, he has written a wonderful reflective piece on his site, Writing On The Moon. David has kindly allowed me to reproduce it for you now. Over to you, David! END_OF_DOCUMENT_TOKEN_TO_BE_REPLACED

Today’s Robot Round-Up is a celebration of a few of our authors trilogies which are coming to a close. Featuring Anne Lyle’s Night’s Masque, Emma Newman’s Split Worlds, David Tallerman’s Easie Damasco, and Chris F. Holm’s Collector series we’re going to share with you the wonderful praise that these trilogies have received!

Reviews for The Prince of Lies, Anne’s final instalment: October has a mammoth amount of Book Birthday’s to celebrate. We have some wonderful releases which will keep you occupied for Halloween; who needs pumpkins when you have books? There are four book birthdays this month: Altapasaeda, capital of the Castoval, is under siege by its own King.

Far to the north, rebels have set a bastard prince

Hey, it’s Leah here, Angry Robot’s new intern. Today’s Robot Round-Up is a celebration of October’s upcoming titles, and we have some brilliant ones to show you. First of all, keep your eyes peeled for our Special Edition post coming soon on Ramez Naam’s amazing second novel, Crux.  Cory Doctorow, author of Little Brother and Pirate Cinema has described Crux as “A blisteringly paced technothriller that dives deeper and even better into the chunky questions raised by Nexus. This is a fabulous book, and it ends in a way that promises at least one more. Count me in.” If this has whet your appetite, both

Hello and welcome to this week’s Robot Round-Up. Having put our email woes behind us, our compiler-bot has been able to gather up another bountiful harvest of Angrily Robotic links.

The reviews of Cassandra Rose Clarke‘s astonishing and heart-breaking novel The Mad Scientist’s Daughter continue to pour in:

• Kristin at My Bookish Ways: “Think you can’t get invested in a romance between

Hello and welcome to our weekly Round-Up of all the Angry Robot themed online activity that’s fit to link out to. Starting with:

Another batch of glowing reviews for Cassandra Rose Clarke‘s rather wonderful The Mad Scientist’s Daughter this week:

Wotcha. Robot Round-Up time. Bit shorter than last week’s epic, but still plenty of good stuff to tell you about, starting with:

The Merchant of Dreams, the second book in Anne Lyle‘s Night’s Masque series, was reviewed by Tammy at Books, Bones & Buffy, who enjoyed the “beautifully written story” but felt she missed out on a lot of back-story through not having

Hello and welcome to the first Robot Round-Up of 2013! It’s been three weeks since our last, pre-holiday-season Round-Up, which means there’s absolutely loads to tell you about. So, without further ado or faff, strap yourselves in and off we’ll go.

It’s been a titanic few weeks for Ramez Naam, whose debut sf thriller Nexus was officially published on January 3rd, but actually came out in the US and ebook editions