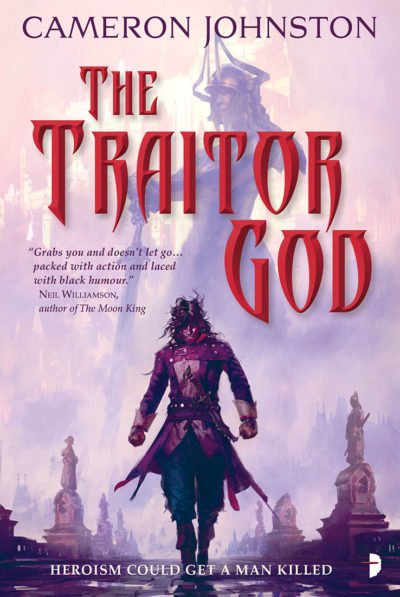 A city threatened by unimaginable horrors must trust their most hated outcast, or lose everything, in this crushing epic fantasy debut.

After ten years on the run, dodging daemons and debt, reviled magician Edrin Walker returns home to avenge the brutal murder of his friend. Lynas had uncovered a terrible secret, something that threatened to devour the entire city. He tried to warn the Arcanum, the sorcerers who rule the city. He failed.

Lynas was skinned alive and Walker felt every cut. Now nothing will stop him from finding the murderer. Magi, mortals, daemons, and even the gods – Walker will burn them all if he has to.

After all, it wouldn’t be the first time he’s killed a god…

“A dark and rich fantasy with an inventive magic system that will raise hairs on your neck.”
– Ed McDonald, author of Blackwing

“An exceptional debut… This book is like a video game, wrapped inside an action movie, brilliantly told in written word form.”
– Out of this World

“Beautifully crafted, with great depth that leads the reader to realize how deeply Cameron has delved into his own imagination… I highly recommend reading this. For a first book from an author, I found it to be incredibly well written. If you need a new book, this is the one.”
– John W Siskar

“The Traitor God is a wonderful fantasy story that knows how to keep you hooked till the end. Its grasp on grimdark elements is stellar and makes this a truly fun book to pick up when you feel like you need a nice quick swim through an ocean of blood.”
– Bookidote

“I haven’t had this much fun with a fantasy novel in ages – this is most certainly one of my highlights for 2018. Johnston’s done a fantastic job, and if you enjoy the likes of Mark Lawrence, you’ll be right at home here.”
– This is My World

“I loved every minute of it. All round a cracking debut and with a few twists and turns is a book that I hope will lead on to others for the author as I really did get a lot from it. Magic.”
– Totally Pawsome

“The dedication to his craft… has delivered an extraordinary tale. I was blown away by Johnston’s debut offering, which is polished enough that you would think this is his fourth or fifth book written.”
– Hippogriff’s Aerie