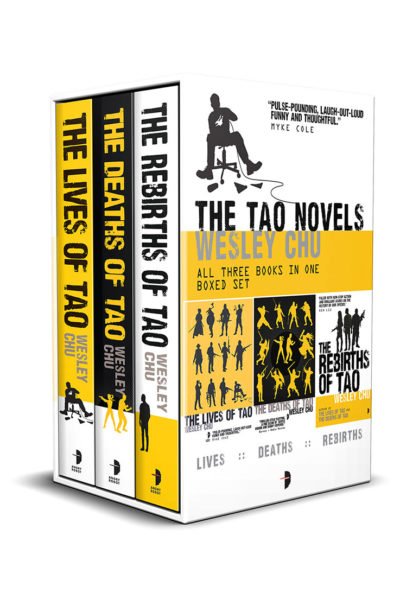 “Filled with non-stop action and brilliant asides on the history of our species, sure to thrill and amuse.”
– Ken Liu, Nebula Award winning author of The Paper Menagerie

A slacker super-spy is possessed by an alien, and thrown into an ancient war which will decide the fate of humanity, in the complete Tao series of witty and action-laced SF thrillers.

Collects The Lives of Tao, The Deaths of Tao and The Rebirths of Tao in a single volume.

When out-of-shape IT technician Roen Tan woke up and started hearing voices in his head, he naturally assumed he was losing it. He wasn’t. He now has a passenger in his brain – an ancient alien life-form called Tao, whose race crash-landed on Earth before the first fish crawled out of the oceans. Now split into two opposing factions – the peace-loving, but under-represented Prophus, and the savage, powerful Genjix – the aliens have been in a state of civil war for centuries.  Meanwhile, Roen is having to train to be the ultimate secret agent. Like that’s going to end up well…

The war between the Prophus and the Genjix escalates as the battle to leave Earth enters a deadly new heights. The end is now in sight, and both factions have plans to leave the Earth, but the Genjix method will mean the destruction of the human race. That’s a price they’re willing to pay.

The world splits into pro-Prophus and pro-Genjix factions, and is poised on the edge of a devastating new World War; the Prophus are hiding; and Roen has a family to take care of. A Genjix scientist who defects to the other side holds the key to preventing bloodshed on an almost unimaginable scale. With the might of the Genjix in active pursuit, Roen is the only person who can help him save the world, and the Quasing race, too. And you thought you were having a stressful day…

“Few books begin more engagingly than The Lives of Tao, a science fiction romp which wears its principal strength – the wit and humor of the narrative voice – on its sleeve.”
– Huffington Post

“The Deaths of Tao is as funny, loveable and entertaining as the first book, and adds even more depth to the characters, story and themes.”
– Fantasy Faction

“…the end result is a thrilling novel that without quirky aliens would sit triumphantly in Ian Fleming or Vince Flynn’s wheelhouse.”
– Staffer’s Review

“Perhaps the strongest part of The Deaths of Tao is the fact that Chu never lets the story get bogged down. Every time he takes the story forward he does it with an action scene in mind, and this trick rips the reader through from start to finish.”
– Buzzy Mag

“The more that I read Wesley Chu, the more I find new ways to love these witty science fiction novels.”
– The Homeschool Reader

“For fast paced, extraterrestrial action and adventure sure to endure the test of time and the science fiction genre. Excellently written with a great sense of urgency and characters that are organic in their evolution, The Deaths of Tao is a Fall must-have sequel.”
– Toonari Post