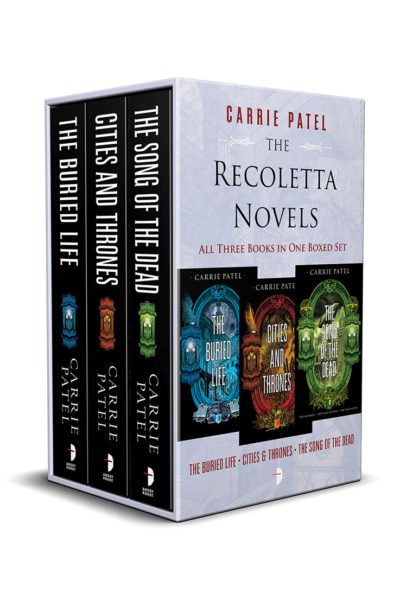 “Carrie Patel’s post-Catastrophic world has become progressively more rich and complex over the course of her trilogy. This engaging political fantasy is full of twists and turns, and The Song of the Dead especially stands out for its imaginative, memorably described characters and settings.”
— Dru Pagliassotti, author of the Clockwork Heart trilogy

Murder, revolution and secrets of a lost past threaten a vast underground city, in the complete collection of the Recoletta novels.

Collects The Buried Life, Cities and Thrones, and The Song of the Dead in a single volume.

The gaslight and shadows of the underground city of Recoletta hide secrets and lies. When Inspector Liesl Malone investigates the murder of a renowned historian, she finds herself stonewalled by Recoletta’s top-secret historical research facility. When a second high-profile murder threatens the very fabric of city society, Malone and her rookie partner must tread carefully, lest they fall victim to not only the criminals they seek, but the government which purports to protect them. Knowledge is power, and power must be preserved at all costs…

The dark, forbidden knowledge of how the city came to be founded has been released into the world for all to read, and now someone must pay. Inspector Liesl Malone is on her toes, trying to keep the peace, and Arnault’s spy ring is more active than ever. Has the city’s increased access to knowledge put the citizens in even more danger? Allegiances change, long-held beliefs are adjusted, and things are about to get messy.

The Library Accord has finally been signed by Recoletta and its neighbours, but the fight for power continues. A desperate attempt to save the spymaster Arnault from execution leads to Malone’s arrest and Jane’s escape. They must pursue each other across the sea to discover a culture that has held together over the centuries. There they will finally learn the truths about the Catastrophe that drove their civilization underground.

“Carrie Patel’s post-Catastrophic world has become progressively more rich and complex over the course of her trilogy… [This] engaging political fantasy is full of twists and turns, and The Song of the Dead especially stands out for its imaginative, memorably described characters and settings.”
— Dru Pagliassotti, author of the Clockwork Heart trilogy

“In the riveting Recoletta series, Carrie Patel is a cultural excavator incisively carving out the recesses of human nature, digging up fossils that reveal both the physical geography of a collapsed United States as well as the existential cartography of humanity. The trilogy is a moving paean wrapped in the rhythms of a steampunk dystopian alternate history that rings with pain, hope, and resistance in a song that will awaken even the dead.”
– Peter Tieryas, author of United States of Japan and Bald New World

“Fans of steampunk alternate histories will enjoy this book, and I suspect that readers of the lighter end of the dystopian genre will too. It’s quick, filled with enjoyable characters, and contains enough socio-political reflectiveness to give you something to chew on. It’s a great debut effort, and, even better, the first in a series.”
– Barnes and Noble

“Vaguely steampunk-ish but not quite classifiable, The Buried Life is recommended for readers comfortable straddling the border of fantasy and sci-fi; dedicated fantasists and hard sci-fi fans may want to go down another hole.”
– Books, Brains, and Beer

“The worldbuilding in The Buried Life is absolutely fantastic and Patel weaves together a universe that’s as grand as it is provocative. Patel is etching out traces of our own civilization from a future perspective, a cultural excavator carving out the recesses, digging up fossils that reveal both the geography of a collapsed United States as well as the intellectual debris of censorship. The Buried Life had me digging deeper, gawking at the literary stakes involved.”
– Peter Tieryas, author of United States of Japan

“This was a really interesting book. To me it was like the love child of a Steampunk and a Dystopian. Seriously. The setting was fascinating — an underground city, a group of rulers that are more dictators than anything, societal rules, and, of course, murder and mayhem. This book took off running. It was fast paced with a hell of a lot of action — which, coupled with the setting, was right up my alley. And on top of the murders and guns and all that, there were also some interesting characters. The main characters here were all quite fascinating — nuanced, layered, realistic. The world and the characters were fascinating, the plot was fast-paced and action-packed. It was a great read.”
– In Case of Survival

“Patel’s voice is her own. I was impressed.  Patel’s debut novel is definitely worth reading.”
– Bookish

“This was a very well written novel. Attention to the logic of not only writing but writing a detective novel was superb. Behind this detecting logic there lurks an obvious perpetrator but you always seem to know that that would be too easy. The fun is in determining the who, and seeing if subsequent events play out in your favor. I like a novel that challenges you and gives you enough information to figure it out. I loved this novel and look forward to Ms. Patel’s next.”
– Koeur’s Book Reviews

“The Buried Life is one of those books where you get much more than you had bargained for. Carrie Patel introduces the reader to a very interesting world, which besides several explanations only raises many more questions. The whole setting of the book is cleverly build by mixing up several of the established genres, Carrie Patel has created a very unique and intriguing blend. The Buried Life is a high recommendation, you don’t come by these types of books very often, great reading stuff.”
– The Book Plank

“It’s got something for everyone. There’s the great secret of the Catastrophe, which shattered the land above Recoletta. There’s air battles, train robberies, betrayals. A whiff of the romantic (as well as of romance) runs through the pages, and if Malone and Jane seem to plunge from the frying pan into the fire quite often – well, it certainly kept me turning pages. There’s some great character moments here, as well as some smartly written dialogue – and the plot runs along nicely. It kept me guessing and kept me reading late into the night. If you’re looking to start a new series, then it’s worth going back to The Buried Life and working your way through the series. If you’re looking for a conclusion to the story of Recoletta, then I can recommend this wholeheartedly.”
– SF and F Reviews

“Patel does it again. This is another great story that takes us from the buried city of Recoletta, to the farming communes, onto a flotilla of ships across the ocean and the Continent where Arnault’s big secret is revealed. I found the resolution of the plot arc very satisfying and Patel did a great job of tying up all the individual plot threads into one satisfying conclusion. It is hard to say much more without risking giving too much away. Suffice to say you will need to find out for yourself.”
– The Qwillery