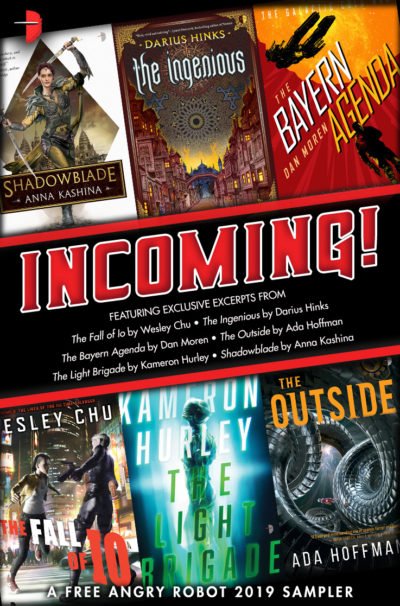 A free Angry Robot preview of the very best science fiction and fantasy of 2019.

Featuring excerpts from The Fall of Io by Wesley Chu, The Ingenious by Darius Hinks, The Bayern Agenda by Dan Moren, The Light Brigade by Kameron Hurley, Shadowblade by Anna Kashina and The Outside by Ada Hoffman.

The Fall of Io by Wesley Chu

The Ingenious by Darius Hinks

The Bayern Agenda by Dan Moren

The Light Brigade by Kameron Hurley

The Outside by Ada Hoffman

“The Outside is a beautiful, stark reclamation of unknowable horror. Hoffman layers thoughtful worldbuilding and rich prose to build a stunning story of power, ambition and personal agency. I couldn’t put The Outside down for fear of what might happen while I was looking away.”
– Sarah Gailey, Hugo Award-winning author of River of Teeth

“The Outside is a fresh and mind-bending mix of cosmic horror and space opera, a compelling story that spans from the deeply personal to the vast mysteries of time and space. Unsettling and gorgeous, this is like nothing I have read before and the book I have been longing for without knowing it.”
– Karin Tidbeck, award-winning author of Amatka and Jagannath

Ada Hoffmann is the author of the space opera novel The Outside, the collection Monsters in My Mind, and dozens of speculative short stories and poems. Ada’s work has been a finalist for the Philip K. Dick Award (2020, The Outside), the Compton Crook Award (2020, The Outside), and the WSFA Small Press Award (2020, “Fairest of All”). Ada was diagnosed with Asperger syndrome at the age of 13, and is passionate about autistic self-advocacy. Her Autistic Book Party review series is devoted to in-depth discussions of autism representation in speculative fiction. Much of her own work also features autistic characters. Ada is an adjunct professor of computer science at a major Canadian university, and she did her PhD thesis (in 2018) on teaching computers to write poetry. She is a former semi-professional soprano, tabletop gaming enthusiast, and LARPer. She lives in eastern Ontario.