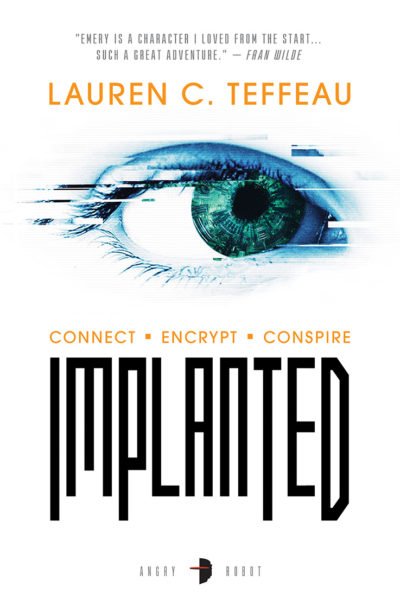 The data stored in her blood can save a city on the brink… or destroy it, in this gripping cyberpunk thriller

When college student Emery Driscoll is blackmailed into being a courier for a clandestine organisation, she’s cut off from the neural implant community which binds the domed city of New Worth together. Her new masters exploit her rare condition which allows her to carry encoded data in her blood, and train her to transport secrets throughout the troubled city. New Worth is on the brink of Emergence – freedom from the dome – but not everyone wants to leave. Then a data drop goes bad, and Emery is caught between factions: those who want her blood, and those who just want her dead.

“Implanted takes readers to the bleeding edge of a hopeful future and dives headlong into the risks required to make that future real. Emery is a character I loved from the start for her skills and flaws both, and Teffeau takes this ultra-high-tech future to new heights and depths with incredible skill. Such a great adventure!”
– Fran Wilde, Hugo and Nebula finalist and Andre Norton-winning author of the Bone Universe series

“Teffeau serves up the future and it’s entertaining and scary!  The arms race of hackers and blockers goes to new heights, in an intriguing tale of life in the non-utopic automated cities of the future.”
– S M Stirling, New York Times bestselling author of Black Chamber and The Sky-Blue Wolves

“Imaginative and thrilling, Implanted features a truly unique premise, characters you’ll want to root for, and a fascinating, fully-realized future.”
– Lori M Lee, author of Gates of Thread and Stone and The Infinite

“A very enjoyable mix of tech and the future vision of dystopia with a bit of romance, rebellion, and funky spy-stuff.”
– Brad K Horner

“Implanted has to be one of the best science fiction, dystopian political thrillers of the year.”
– The Literary License Podcast

“Teffeau has given us the perfectly mixed cocktail of science fiction, romance, and drama that eases us into one hell of a ride.”
– The Splattergeist

“Really interesting and I loved the whole idea!” 5/5 Stars
– The Everlasting Library

“A fun read that I read in one sitting… Emery is a fun and fierce protagonist.”
– Captain’s Quarters

“The book certainly stands out for creativity of conception and narrative voice. I’ll be keeping an eye out for the author’s next adventure.”
– Deborah J Ross

“Loved this book for the creativity of the author in this new world. There are dystopias and then there is the city of New Worth. A domed city, a secret organization of spy like data couriers, and tinkering with blood and DNA? COUNT ME IN… ”
– Rainy Book Reviews

“Lauren Teffeau is excellent at putting over action in writing, making you out of breath as you follow Emery through her various escapes.”
– Strange Alliances

“The best part for me was that Implanted read more like a movie than it did a book. I love books like that. I hope it gets optioned one day so I can see it on the big screen.”
– Keyboards and Coffee

“Really well executed and had a super engaging plot line!… AAGGGHHHH THIS BOOK WAS HONESTLY SO GOOD!! I LOVED IT!!”
– The Everlasting Library

Lauren C Teffeau lives and dreams in the southwestern United States. When she was younger, she poked around in the back of wardrobes, tried to walk through mirrors, and always kept an eye out for secret passages, fairy rings, and messages from aliens. Now, she writes to cope with her ordinary existence. Implanted is her first novel.

Other books in Cyberpunk, Science Fiction