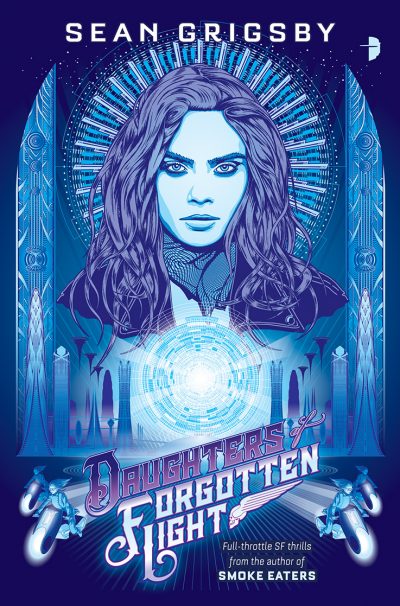 “A fun, fast, foul-mouthed thrill ride with more than its share of real surprises and pathos.”
– Spencer Ellsworth, author of A Red Peace

A floating prison is home to Earth’s unwanted people, where they are forgotten… but not yet dead, in this wild science fiction adventure.

File Under: Science Fiction [ Banged Up | Out of Mind | Girls Gone Bad | Moppet in Space ]

Deep space penal colony Oubliette, population: scum. Lena “Horror” Horowitz leads the Daughters of Forgotten Light, one of three vicious gangs fighting for survival on Oubliette. Their fragile truce is shaken when a new shipment arrives from Earth carrying a fresh batch of prisoners and supplies to squabble over. But the delivery includes two new surprises: a drone, and a baby. Earth Senator Linda Dolfuse wants evidence of the bloodthirsty gangs to justify the government finally eradicating the wasters dumped on Oubliette. There’s only one problem: the baby in the drone’s video may be hers.

“A fun, fast, foul-mouthed thrill ride with more than its share of real surprises and pathos.”
– Spencer Ellsworth, author of A Red Peace

“An incredibly diverse cast of villains who all just happen to be female, motorcycles that run on light and a glass prison in space, Daughters of Forgotten Light is a joyride into anarchy and out the other side.”
– Anna Stephens, author of Godblind

“Rollicking pulp action around a deep, dark heart brimming with barely-contained rage. The book balances brutal deprivation and violence against moments of pride, joy, and sadness. Even pitted at deadly odds against one another, the women of Daughters of Forgotten Light form powerful relationships that shine against their bleak world. The book never apologizes and never pulls a punch, and neither do its characters.”
– Caitlin Starling, author of The Luminous Dead

“High octane and hard hitting. Daughters of Forgotten Light is exactly what I want from sci-fi: badass women getting it done… with unapologetic grindhouse glam.”
– KC Alexander, author of Necrotech and Mass Effect: Andromeda: Nexus Uprising

“Grab your energy boomerang and get ready for a wild ride! Grigsby’s latest book is a full-throttle nightmarish sci-fi Mad Max: Fury Road. It’s violent, intense, and packed with passion as exiled women fight for their very right to exist.”
– Beth Cato, Nebula nominee and author of Breath of Earth

“I enjoyed Daughters of Forgotten Light. It’s very entertaining pulp, and Grigsby has a lot of promise as an author. I’ll be looking forward to his future work.”
– Locus

“Another opportunity for Grigsby to deliver on a brilliant concept – in this case, a sci-fi thriller than blends the righteous anger of Kelly Sue DeConnick and Valentine de Landro’s Bitch Planet with the crackerjack action thrills of Escape from New York.”
– Barnes & Noble Sci-Fi & Fantasy Blog

“A gripping tale with deadly, dangerous, powerful female characters who are impossible to forget.”
– Rambles, Writings and Amusing Musings

“It was definitely something different… I will warn you, this is not a book for the faint of stomach… Be prepared for blood, foul language and violence. In case you can’t tell from how long this review is, I really did enjoy this book. And the ending is quite what I wanted, but I was very happy with it. 4.5 hoots!”
– Purple Owl Reviews

“A brilliantly written book by Sean Grigsby with an end you won’t see coming. A gripping tale with deadly, dangerous, powerful female characters who are impossible to forget.”
– Solo the First

“Grigsby keeps his promise to readers who pick up his books looking for action. This isn’t the place to question plausibilities, turn the page already! Suspension of disbelief is taken for granted through the gore and visceral grunge. It works. Daughters of Forgotten Light left me with a book hangover thick with ’What was that I just read?’ and ’Where do I get more?’”
– SFF World

“An ingenious premise that Grigsby delivers on with intelligence and style. Smoke Eaters is a treat!”
– Jason M Hough, New York Times Bestseller