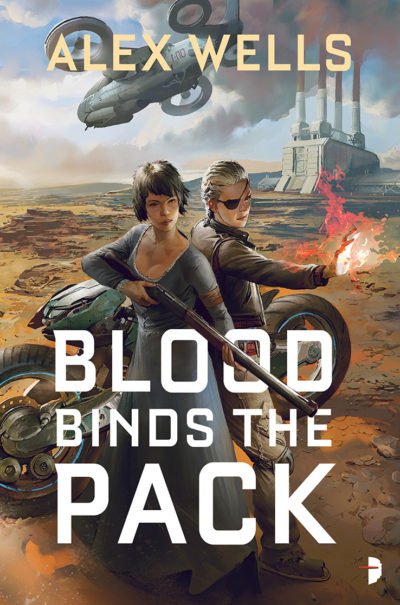 “An absolute riot of a SF/fantasy alt-Western, set on a remote desert world where a greedy technology corporation is coming up against both magic and the power of unionising.”
– K J Charles, author of The Magpie Lord

TransRift corporation are coming down hard on the people of Tanegawa’s World. But the biker gang insurrection led by Hob Ravani with her weird witchy powers won’t give up without a fight.

Join the fight for the people and power of Tanegawa’s world in this thrilling sequel to The Kitschies’ Golden Tentacle Award-winning Hunger Makes the Wolf.

“THIS. WAS. MAGNIFICENT. An absolute riot of a SF/fantasy alt-Western, set on a remote desert world where a greedy technology corporation is coming up against both magic and the power of unionising. Also biker witches and female friendships. This book *rocks*.”
– KJ Charles, author of The Magpie Lord

“It is a rare thing, when a second book from an author surpasses the excellence of the first. I did not expect to be so swept away, but Blood Binds the Pack is a tremendous story. Everything you loved about Hunger Makes the Wolf is here – the weird west setting, the charming characters, the fight for lives and loves. But everything in Blood Binds the Pack elevates all that came before.”
– E Catherine Tobler, author of the Folley & Mallory series

“Blood Binds the Pack is a hell of a space western. It ramps to an explosive conclusion—one whose resolution comes a little bit out of nowhere. But on the whole, this is an enormously fun book, and I sincerely hope to see many more books from Alex Wells in the future.”
– Tor.com

“Creative, angry, and joyous in equal parts, I can’t wait to see what Wells serves up next.”
– Binge on Books

“At the risk of sounding like I’m gushing, I properly loved this book!”
– Helen Lindley

“Blood Binds the Pack will take you on a high-octane ride across the sands of Tanegawa’s World with Hob’s misfit band of mercenaries. It’s a lot of fun to read and stands out as something a bit different. Recommended to anyone that likes sci-fi based future fun and action.”
– Helen’s Bookshelf

“This is an action-packed thriller, but it also explores issues of those who seek equality and justice from those who control in an impossible situation.”
– Strange Alliances

“Blood Binds the Pack is a fantastic follow up to Hunger Makes the Wolf.”
– The Illustrated Page

“If you’ve been looking for something like the Colorado Coalfield War IN SPAAACE WITH EXTRA ADDED PSIONICS! then this may be what you want.”
– James Davis Nicoll

“There is a distinctive sensation I get from visiting Tanegawa’s World, the planet where Alex Wells’ Hob Ravani novels are set – like walking against the wind, sand grinding between my teeth. It’s a pitiless, unrelenting tableau of salt and grit and thirst, and, like the best planets, its inhabitants are at the mercy of its disposition. It shapes your body, colonizes your mind.”
– The 1000 Year Plan

“Wildly entertaining. Creative, angry, and joyous in equal parts, I can’t wait to see what Wells serves up next.”
– Binge on Books

“Hunger Makes the Wolf and Blood Binds the Pack form an addictive duology that has become a new favourite.”
– Earl Grey Editing

“This is Dune if Dune were written by a pissed off feminist steeped in socialism, and let me tell you that I am here for that.”
– Amanda J McGee

“My feelings about these books can be summarized as !!!! hearteyes !!!! and with that, I believe that I may have used up my lifetime quota of exclamation marks. Just go read the books.”
– Mad Art Lab

“Wells started strong and ended stronger — can’t ask for more than that… Hunger Makes the Wolf was one of my favorites last year, and this is better. Ultimately, there’s not much more to say than that.”
– The Irresponsible Reader

“Stronger than the first in terms of plot and pacing and characterization – not that book one was bad, by any means, but this one was better and a satisfying conclusion to the story.”
– Almost, Almost

Praise for Hunger Makes the Wolf

“The story is a fast-paced, edge-of-your-seat space opera, tied together with the characters’ struggles, adventures, and mishaps. If you’ve ever thought, “You know what Dune needed more of? More magic and a biker gang!” then this book was written for you.”
– The Canary Review

“Hunger Makes the Wolf was one of my favorites last year, and this is better.”
– Irresponsible Reader 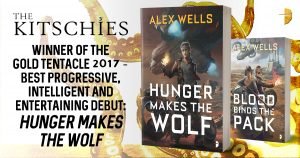