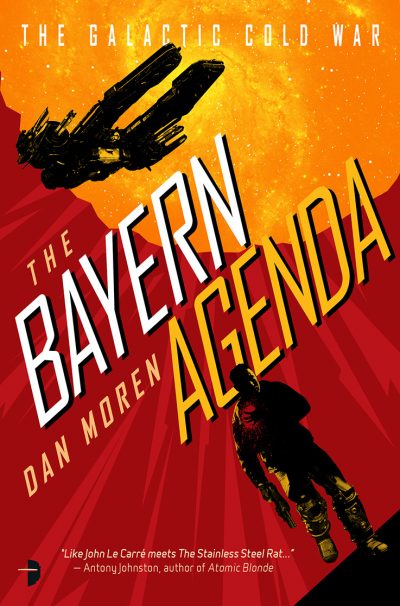 A new Cold War threatens the galaxy, in this fast-paced and wisecracking thriller of spies and subterfuge.

“Swap out the old Soviet Union for the Illyrican Empire, the Bayern Corporation for Spectre, and Simon Kovalic’s KO gun for Bond’s trusty Walther PPK and you’ve got yourself one of the most entertaining genre mashups within an astronomical unit.”
– Publishers Weekly

“The Bayern Agenda is exactly the dose of intergalactic espionage you need. Action, humor, and pathos, wrapped up in a plot that Le Carré would be proud of … Moren is one to watch.”
– Eric Scott Fischl, Author of Dr. Potter’s Medicine Show

“A wisecracking caper that nevertheless doesn’t skimp on the details and human cost of interstellar war, like John Le Carré meets The Stainless Steel Rat. Moren is one to watch.”
– Antony Johnston, creator of Atomic Blonde and The Coldest Winter

“The action scenes, both on the ground and in space, show a focus on thoughtful planning and careful pacing. The characterization delves just enough into emotionality to give the characters realism without moving the focus away from fights, intrigue, and spycraft.”
– Publishers Weekly

“A great spy story, with tidbits of science explaining the intergalactic travel and even a hint of romance to come.”
– Booklist