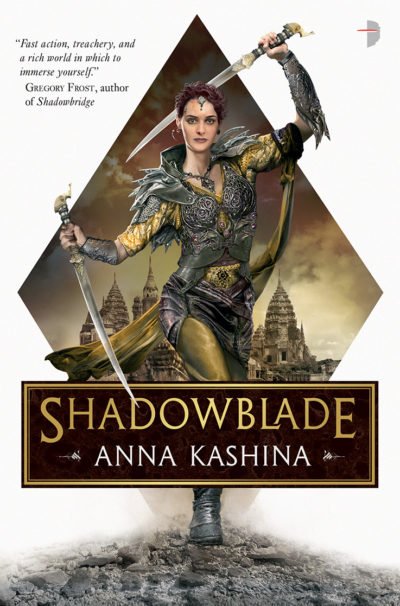 A young sword prodigy must impersonate a lost princess and throw her life into a deadly political game, in this kinetic epic fantasy novel by the author of the award-winning Majat Code series

“Kashina delivers a fantasy novel of political intrigue, betrayal, blood magic, and a dash of romance… Shadowblade is a great novel for readers wanting to dip their toes in fantasy.”
– Booklist

“Shadowblade is a book which has a little bit of everything. It picks and chooses from traditional epic fantasy tropes, while having a modern feel which keeps things interesting.”
– The Fantasy Inn

“Elite assassins! Ancient Magic! Everlasting love! Shadowblade is an enthralling fantasy romance that will have you turning pages long into the night.”
– J M Sidorova, the author of The Age of Ice

You get fast-paced travel with political intrigue and danger, amazing martial arts fights of extreme skill, cultural immersion from around the world, and a little hint of romance without ruining the tough fighter feel… I really cannot express enough times how highly I recommend this story to everyone.”
– In Pursuit of My Own Library

“Such a great read! One of the things I really enjoyed about this instalment is how Kashina addressed the elephant in the room, which was the relationship established in the first instalment.  She really showed both the power and the peril of love along with some of what it would take to really lead as a ruler, not just hold the name. I loved each reveal, each twist, and the tension.”
– E, The Book Pushers