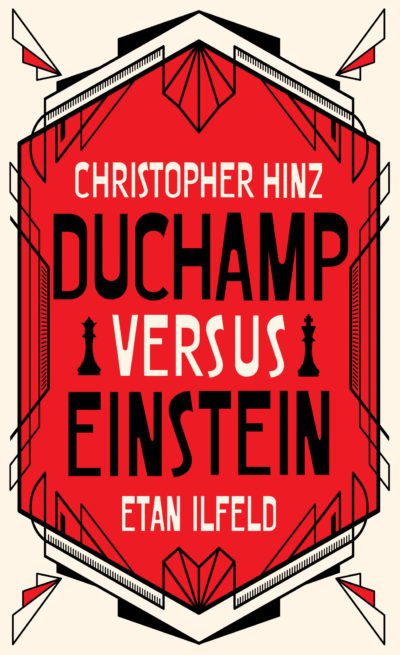 Inspired by Marcel Duchamp’s archived letters, Duchamp versus Einstein is a science fiction novelette spanning some of the most monumental events of the 20th century, and bringing together two of the most transformative figures of the era in art and science for a surreal chess match that could reshape history.

An alien time-traveler ensnared in Earth’s 20th century plots her escape by changing humanity’s fate, and not for the better. But her strange encounters with Marcel Duchamp and Albert Einstein take an unexpected turn when she realizes she’s pregnant.

“A luminous game of chess between art and science that is played across the page with lethal precision.”
– Lavie Tidhar, John W. Campbell Award-winning author of Central Station

“You think you’re familiar with the biographies of Albert and Marcel? Duchamp Versus Einstein is full of surprises, bringing these two fascinating intellects together around a chess board at a pivotal moment for mankind. A very engaging tale.”

“A thought-provoking read, and at the same time an expansion of chess endgame theory! Only Einstein could save an endgame with just a king against king and queen!”
– Matthew Sadler, English Chess Grandmaster and British Chess Champion

Praise for the author, Christopher Hinz:

“This is a fast-paced future thriller that delivers on the promise of its high-concept premise.”
– The B&N Sci-Fi & Fantasy Blog

“This is, genuinely, a good book that appeals to my love of sci-fi, intelligent characters and puns.”
– Purple Owl Reviews

“You’ll want to hang in there for the entirety of the ride.”
– Strange Alliances

“Fast-paced action, with political intrigue, and spy-craft-like war make for a book that thrills and excites in equal measure.”
– Morpheus Tales

“I’ve come away a fan of the author and the series.”
– Looking for a Good Book

“[Liege-Killer is] a genuine page-turner, beautifully written and exciting from start to finish… Hinz presents this material with the assurance of classic sf and the vividness of the new masters… Don’t miss it.”
– Locus

“Liege-Killer moves along at a brisk clip, providing one action-filled scene after another. Hinz writes with skill and verve. His world is logical and alive, and he peoples it with credible and compelling characters.”
– San Francisco Chronicle

Etan Ilfeld is the author of Beyond Contemporary Art and holds a physics degree from Stanford University. He is a US chess master and the inventor of Diving Chess. He is the owner of Watkins Media.

Christopher Hinz is the author of several science fiction books. Liege-Killer won the Compton Crook Award for best first novel and was nominated for the John W. Campbell Award for best new writer. He has written screenplays and a graphic novel, scripted comics for DC and Marvel, and has worked as a newspaper reporter and technical administrator of a small TV station.