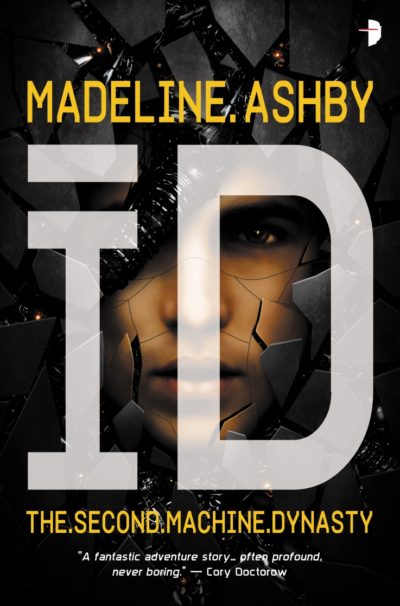 “The world that Ashby envisions is fascinating, filled with strange ideas, nifty technology, and some rather mature implications.”
– Tor.com

File Under: Science Fiction [ vN-2.0 | Island in the Streams | Failsafe No More | The Stepford Solution ]

“iD explores the uncomfortable possibilities and limitations of love within slavery and free will under constraint. Ashby intelligently and brutally explores the way people are willing to abuse, devalue and destroy any form of consciousness they’re able to define as ‘other’, while the robots challenge the limits of love, devotion and life after death.”
– Toronto Globe & Mail

“It really is a modern I, Robot, but with a lot more grit, moral depth, and more interesting prose. Madeline Ashby ought to be seen as one of the big new names in science fiction.”
– Hardcover Wonderland

“[A] sci-fi series not to be missed. Ashby has a wonderful imagination, an eye for detail, and characters that I don’t want to part from.”
– Bibliotropic

“Ashby wowed me with her world-building … The plot is often fast paced, there is action, violence, sex and some really good geek humor as well … iD left me with way more philosophical questions, questions of humanity, justice and choices [than vN].”
– Closet Geeks and Slow Mo

“The characters are richly drawn and engaging. The author pays us the compliment of not dumbing down the computer and technical stuff and her system holds together well.”
– Celtic Frog Reviews

“I love a book that kicks me in the head. iD cuts deep into questions of choice and free will and imperfection, and it hurts.”
– Giro.org

“Madeline Ashby has written a very immersive and great piece of science fiction. A story with likeable and intriguing main characters. A story full of feelings and of course, a failsafe.”
– Just a Regular Adventure