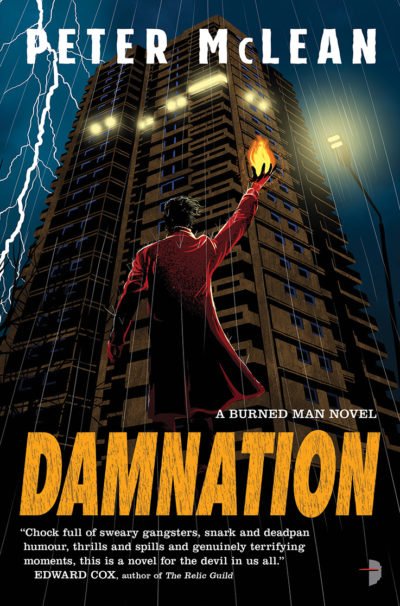 Shambolic demon-hunting hitman Don Drake is teetering on the edge of madness in this smart, witty urban fantasy novel.

The third book in the Burned Man series

“Dark, bitter, bloody and with a streak of black humour, this series continues to deliver.”
– Scifi Now

“This is a cracking book that is part of a cracking series. Highly recommended.”
– The Eloquent Page

“The writing is addictive, the prose apt and when you throw into the mix a kick ass plot that has our hero alongside his friends forced into a situation that no one likes, we get to see just how dark his world has become with his only light against it being used as a pawn. Future outings are going to see one hell of a reckoning (literally) and I for one can’t wait to see how events will play out. Definitely a series to read.”
– Falcata Times

“Don Drake continues to be an enjoyable fuck-up. Damnation is a solid, entertaining read, but beware of the author’s cruel nature in leaving us with one almighty cliff-hanger ending.”
– Pop-Verse

“Peter McLean continues to knock it out of the park with the Burned Man series. This is urban fantasy at its best, and it perfectly blends fantasy with modern society. 5 stars”
– San Franciso Book Review

“McLean’s punchy writing is what draws you in and Drake is what keeps you reading. This is dark, brooding, with a wicked sense of humour.”
– Morpheus Tales

Praise and Reviews for the Burned Man series: