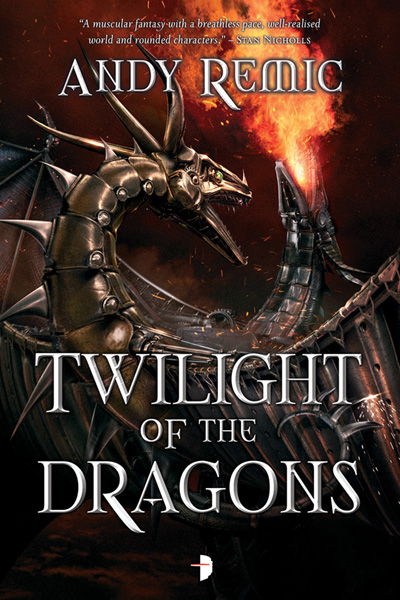 Twilight of the Dragons

A group of heroes makes dangerous bargains in order to overthrow the dragonlords and their Dragon Engines.

File Under: Fantasy [ Hatchlings and Hatchets | Chop-chop! | Give Love a Chance | Dragons vs Wolves ]

The second book in the Blood Dragon Empire series

During a recent dwarf civil-war deep under the Karamakkos Mountains, the magick-enslaved dragonlords have broken free from centuries of imprisonment and slaughtered tens of thousands throughout the Five Havens before exploding from the mountain and heading in fire and vengeance for the lands of Vagandrak. Two once-noble war heroes of Vagandrak ‘ Dakeroth and his wife Jonti Tal, an archer and scholar, the Axeman, the White Witch and a Kaalesh combat expert find themselves in a unique position: for they have discovered the ancient dragon city of Wyrmblood, and a thousand unhatched dragon eggs.

“If you like your fantasy kick arse, epic, dark and just all around awesome, jump into book two of The Blood Dragon Empire.”
– Shelf Inflicted

“A fun, foul-mouthed, frantic sequel to The Dragon Engine and The White Towers.”
– Beauty in Ruins

“All in all, Twilight of the Dragons was an undeniably brutal, no-holds barred grimdark, which grabs a reader by the throat and never lets go.”
– Bookwraiths

“Twilight of the Dragons is undeniably brutal and uncompromising, but it is also completely engrossing…Remic has successfully out Remic’ed himself. Most impressive.”
– The Eloquent Page

“No-holds-barred epic fantasy for a mature audience.”
– The Speculative Herald

“Remic is an excellent writer. He brings these scenes alive on the page. He can create an atmosphere of light hearted camaraderie and banter in one paragraph and then go to overwhelming despair the next and he is an expert at putting your emotions through the wringer.”
– Lynn’s Books

“The author brings his A-grade storytelling skills to bear and unveils a pacy, action driven plot that is easy to get completely engrossed in. I could wax lyrical about Andy Remic’s writing all day.”
– The Eloquent Page

“I have to applaud author Andy Remic for his amazing, vibrant and beautifully descriptive writing style. He paints such a vivid picture that I could almost SEE the events in the book unfolding in front of my eyes. This is a fantastic book that I couldn’t fault in any way.”
– Two Nerds Talking

“Remic once more manages to take the story off into a completely different direction right at the end, leaving me fascinated as to what happens next.”
– Brainfluff

“Remic continues to wow his readers with an effective blend of gore and humour. With no shortage of daggers to the eye or split-second decapitations, fans of grimdark fantasy will have no reason to complain. Toss in the affable camaraderie of the heroes and you can rest assured that this book will not disappoint.”
– Cowering King