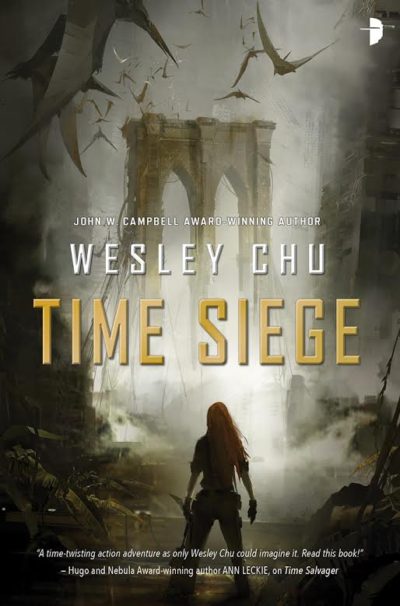 “When you add up all the elements—great cast, high stakes, well-crafted language, new exfoliations of a classic premise — I think we can say with assurance that Chu is certainly on his way to a vibrant second stage of his career.”
– Paul Di Filippo, for Locus Magazine

Not available from us in your territory, check the Book Details for publisher information.
SKU: AR9780857666338
Category: 2016, Duology, Science Fiction Tags: Out Now.

Earth is a toxic, sparsely inhabited wasteland – the perfect hiding place for a fugitive ex-chronman to hide from the authorities.

James has allies, scientists he rescued from previous centuries: Elise Kim, who believes she can renew Earth, given time; Grace Priestly, the venerated inventor of time travel herself; Levin, James’s mentor and former pursuer, now disgraced; and the Elfreth, a population of downtrodden humans who want desperately to believe that James and his friends will heal their ailing home world.

James also has enemies. They include the full military might of benighted solar system ruled by corporate greed and a desperate fear of what James will do next. At the forefront of their efforts to stop him is Kuo, the ruthless security head, who wants James’ head on a spike and will stop at nothing to obtain it.

“The story’s intricate plotting, breathtaking battles, and hefty doses of cruelty, betrayal, sacrifice, courage, and hope culminate in a cliff-hanger that will leave readers longing for the next installment.”
– Publishers Weekly, starred review

“If you’re looking for a book that embodies the spirit of the best summer blockbusters, I cannot recommend this series enough. It’s easy enough to jump right into the action with Time Siege, and those returning to the Time Salvager universe will find a sequel that’s bigger and better in every way.”
– Sam Reader, for the B&N Sci-Fi & Fantasy Blog

“So, I’m going to give a hefty five stars to ‘Time Siege’ and say that, if you’re looking for fresh sci fi with cool as hell world building, time travel and bloodthirsty capitalist corporations vying for intergalactic dominance then this is the series for you.”
– Lord Belatiel

“There’s explosions. There’s fist fights. There’s sharp wit, and poignant dialogue. There’s people being, well, people, the best and worst of us, in a detailed, believable, broken world. It’s a great entry in the series, and left me wanting more.”
– Sci-Fi and Fantasy Reviews

“Time Siege is a thrilling, summer-blockbuster of a novel.”
– Every Read Thing

“It’s a fun series.  I’m along for the ride.”
– Elitist Book Reviews

“This book has an excellent story, an amazing world and with some really good characters – but above that it has really nice themes and conflicts that really adds an excellent depth.”
– Fangs for the Fantasy

“If you like sci-fi and you appreciate good time travel, you owe it to yourself to read this series. The Time Salvager series is one of my favourites of the last few years.”
– Fantasy Faction

“Chu has knocked it out of the park again.”
– San Francisco Book Review

“Anyone who likes a lot of war and conflict and action should really pick up these books, and they should really get into this one even more.”
– Brad K Horner

“Even better than the first. There’s no shortage of action, a lot of character development and a twist at the end of the tale.”
– Lynn’s Books

“One thing that’s crystal clear now — and has been evident all along, really — is that Wesley Chu can write a fight scene. Whether it’s single combat or larger forces, he delivers. The scenes are suspenseful, intense, and believable.”
– The Irresponsible Reader