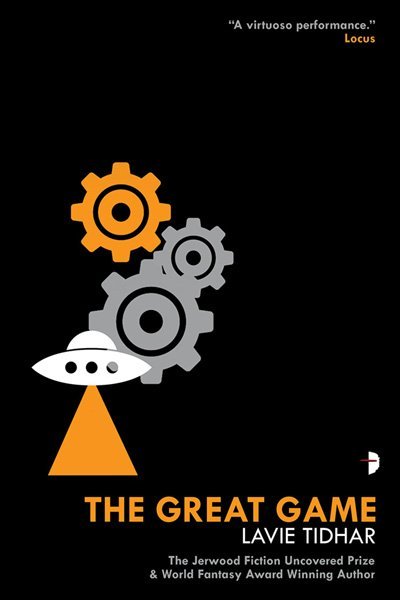 “Achieves moments of surprising depth and beauty, with real insights into human history and psychology as well as the immense and varied wealth of writing in the last half of the 19th century. It’s a virtuoso performance.”
– Locus

Airship battles, Frankenstein monsters, alien tripods and Houdini: The Great Game is a cranked-up steampunk thriller in which nothing is certain – not even death.

File Under: Steampunk [ End Of Days | Only The Beginning | The Ark | Insane Thrills ]

The third book in the Bookman Histories series

Smiley’s People meets War of the Worlds… As a 19th century unlike our own comes to a close, Mycroft Holmes is found murdered outside his London club. It is up to retired shadow executive Smith to track down the killer ‘ only to stumble on the greatest conspiracy of his life. Strange forces are stirring into life around the globe, and in the shadow game of spies nothing is certain. In The Great Game, World Fantasy Award winning author Lavie Tidhar concludes his epic trilogy of a Victorian era that could never have been: filled with literary references galore, not to mention airship battles, Frankenstein monsters, alien tripods and death-defying acts. It is a world where nothing is certain – not even death.

And furthermore… venture deeper into the Lost Files of the Bookman Histories in this 2016 edition, as Professor Tidhar explores the ‘Dynamics of an Asteroid’!

“The Great Game is a very fine addition to the [Bookman Histories] series, and can be enjoyed without having read the others, though you owe it to yourself to read the entire series if well detailed alternate history science fiction is your sort of thing.”
– Starburst Magazine

“I heartily recommend The Great Game; not only a satisfying read, but an enjoyable, fun, and interesting one too.”
– Libris Leonis

“…occasionally, a novel throws caution to the winds and goes for the absolutely insane. The Bookman Histories falls into that last category, and the most recent instalment, The Great Game, lives up to that reputation.”
– OwlCat Mountain

“The marvellous and oddly disturbing mind of Lavie Tidhar has once again cranked out an awesome steampunk novel.”
– Barry Huddleston, Gnostalgia

“Spies, monsters, machines, and mad scientists fill every page, and the action never stops … Twists and turns await around every corner, constantly leaving readers wonder what will happen next.”
– Jessica Nelson, AllwaysUnmended

“Tidhar’s world is energetic and a tad confusing as he switches from points of view and narrative styles, but nevertheless it is a thoroughly fun book and a lively adventure.”
– Terror Tree

“This is a wild and imaginative adventure through London and Paris as Tidhar loots both history and literature for a diverse cast of characters to weave together in a very satisfyingly wild universe.”
– Gail, Disorganised, as Usual