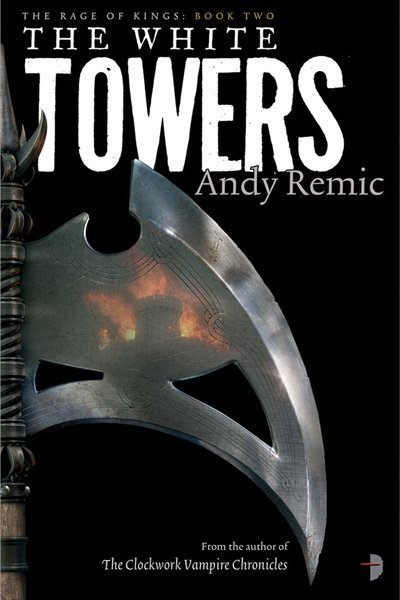 Vagandrak is broken, and a new threat has arisen that threatens to defeat even the mighty Iron Wolves. The now-disgraced Iron Wolves are the realm’s only hope, but there’s a problem: they’ve been sentenced to death by the insane King Yoon for the dark sorcery in their blood.

“For anyone who is missing their David Gemmell fix.”
– iO9.com

Book Two in The Rage of Kings Series

Vagandrak is broken, and a new threat has arisen that threatens to defeat even the mighty Iron Wolves.

The twisted, deviant Elf Rats have gathered in the toxic realm beyond the White Lion Mountains… swiftly they invade the troubled land of Vagandrak, killing for profit and pleasure.

The now-disgraced Iron Wolves are the realm’s only hope, but there’s a problem: they’ve been sentenced to death by the insane King Yoon for the dark sorcery in their blood.

In the mountains of Zalazar lie the White Towers, pillars of legend said to contain the Heart of the Elves. The Iron Wolves must journey north to steal the Heart, and purify the evil in the land, but the land belongs to the Elves – and they won’t give it up without a fight!

“A worthy successor to the Gemmell crown.”
– SFBook.com

Praise and Reviews for Andy Remic:

“Andy Remic has to be given credit for his unflinching style which is certainly not for everyone. The action and gore levels are increased, while the characters are all tested and reveal more about themselves… The action and snappy dialogue are all here. This book delivers exactly what its predecessor promised: the ability to bewitch the reader and to turn your expectations upside down.”
– Fantasy Book Critic