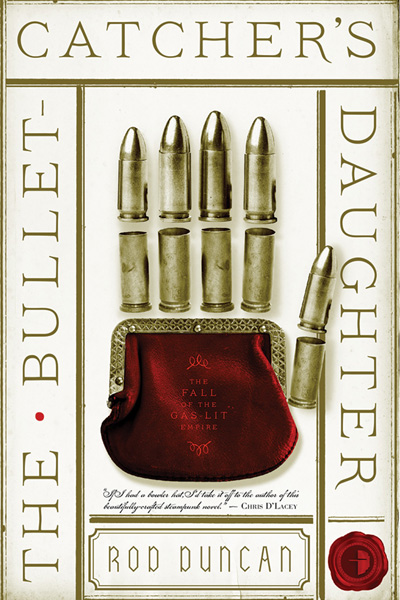 “Rod Duncan’s The Bullet Catcher’s Daughter is a magic box pulsating with energy. Compulsive reading from the get-go, the blend of steampunk alternate history wrapped in the enigma of a chase makes for first-rate entertainment in this finely crafted novel.”
– Graham Joyce, author of Year of the Ladybird

Elizabeth Barnabus is a consulting detective. More accurately, she is a consulting detective when disguised as her brother, the two of them long on the run from a family debt. Hired to find a missing aristocrat, Elizabeth and her brother run afoul of both nations of the divided England, including the all-powerful Patent Office, which manages the careful detente between the countries.

Elizabeth Barnabus lives a double life – as herself and as her brother, the private detective. She is trying to solve the mystery of a disappearing aristocrat and a hoard of arcane machines. In her way stand the rogues, freaks and self-proclaimed alchemists of a travelling circus.

“Elizabeth Barnabus is a uniquely intriguing character who will take readers on a fascinating journey through the strange landscapes of the Gas Lit Empire. Rod Duncan’s storytelling skill brings his fictional world to a mysterious, vibrant life which will entice readers from the first page. Enter his world and enjoy the ride!”
– Stephen Booth, bestselling author of the Cooper & Fry novels

“Steeped in illusion and grounded in an alternative history of the Luddite Rebellion, Duncan’s strong supernatural mystery serves ably as both a standalone adventure and the start to a series…Strategically placed steampunk tropes inform but do not overwhelm Elizabeth’s headlong quest to find a missing aristocrat sought by the Patent Office, which is fixated on both achieving perfection and eliminating “unseemly science.” A hazardous border crossing into the permissively corrupt Kingdom of England and Southern Wales provides ample excitement, and a glossary at the novel’s conclusion hints enticingly at a much more involved story to come.”
– Publishers Weekly

“I was completely caught up in her adventure and her plight. I think steampunk readers and fantasy/sci-fi readers will enjoy this one, so I’m recommending it for them even though (and to some extent because) its use of steampunk is a bit different. I found it to be a refreshing change from more formulaic steampunk novels.”
– Popcorn Reads

“A detective story with a difference … Chapters begin with quotes from the legendary Bullet-Catcher’s Handbook, phrases that introduce not only the idea of illusion that pervades the novel, but also the author’s sly humour. [Duncan’s misdirection is] subtly and well done, all the way through the book, right to a neat little twist at the end, a play on the title that had me nodding in approval. Each [character] is vividly portrayed, lively enough to feel like the heroes of their own stories, all with distinctive voices; it’s always a good sign when you find yourself reading dialogue out loud, rolling your lips and tongue around the words. Rod Duncan’s talent has combined inventive plot and characterisation to create a smart, amusing and fascinating tale that had me reading long into the night.”
– Fantasy Faction

“It’s all steampunk and circus wonder as we follow the adventures of Elizabeth Barnabas.The double crosses along the way keep the plot tight and fun, and the conclusion sets us up nicely for book two.”
– The Washington Post, Best New Science Fiction and Steampunk

“If I had a bowler hat, I’d take it off to the author of this beautifully crafted steampunk novel.”
– Chris D’Lacey, author of The Last Dragon Chronicles

“Close escapes and the hint of a possible romance drive the action forward. However, the ending raises some questions about the overall plot. Most readers will enjoy the adventure and look forward to the next installment.”
– SF Revu

“The Bullet-Catcher’s Daughter is off to a solid start. Rod Duncan has created a wonderful setting in The Bullet-Catcher’s Daughter taking in account the big as well as the small things that are needed to make a world go round. He has struck a perfect balance between both highlighting the characters, from our main protagonist Elizabeth Barnabus down to the secondary characters, and the world itself, using bits and pieces of exisiting history spinning it in his own way by adding enough fantasy influences to make it one-of-a-kind. It is with these kind of books that make sure the fantasy genre is kept fresh. If you are looking for something new and refreshing make sure you read The Bullet-Catcher’s Daughter, it’s is everything you want and much more!”
– The Book Plank

“I was immediately hooked by the world Duncan created. What would the world look like if the Industrial Revolution had been halted, even reverse? What really made this book for me was Elizabeth Barnabas. Her unusual upbringing in a traveling circus and her five years of forced independence have made her clever and strong. She’s a wonderful character and it was a treat to watch her work through the challenges the cropped up as she find out why everyone wants to get their hands on the Duchess’s missing brother. The Bullet-Catcher’s Daughter is the opening book in a series and I will be eagerly waiting for the next installment of Elizabeth’s adventures.”
– Summer Reading Project

“The Bullet Catcher’s Daughter is an entertaining book that has some genuine, original touches combined with a clever story and even cleverer characters.”
– SF Book Reviews

“Rod Duncan has successfully written an absorbing tale from the perspective of a woman in the early nineteenth century.  This is science-fiction with the sub genre of Steampunk, so technology is unorthodox and fascinating. A cracking read.”
– Fancy Pans Cafe

“Duncan has crafted a credible and intriguing world where the twists of a society founded on very different ideals are perhaps even more important than the technology. That makes this novel, while solidly a steampunk offering, feel very fresh and engaging. The backdrop of the circus and the surprising way Elizabeth manages to make a living give the whole story real depth. This is the first in a planned series of novels entitled The Fall of the Gas-Lit Empire: I’m certainly looking forward to the next installments. Fabulous.”
– Geek in Sydney

“Duncan is an accomplished crime writer, and this detective story with fantastical elements shows his chops to great effect, and the steampunk elements don’t overtake the story; instead, they add just enough to make it more interesting. The ending leaves so many wonderful possibilities for more adventures with Elizabeth, and you’ll want to keep an eye out for Unseemly Science in May!”
– My Bookish Ways

“I liked a lot about this book. Traveling circuses, illusions, deceptions. I like that the steampunk elements aren’t over the top, and it isn’t romance-heavy, either.  By the end of the book I had a good understanding of the world and politics, mostly revealed through Elizabeth’s travels and narrow escapes.”
– Cynthia’s on Pens and Needles

“Any writer who can, without infodumping, bring me directly into a fantastical and outrageously unlikely alternate steampunk world earned your scarce book-buying dollars. He gave such reality to the conundrum of how to simply exist as a woman in the world he’s made that I was wincing, squirming, and blushing for the privilege that being male has always brought. Please believe me…this is powerful storytelling talent working so smoothly you can’t feel the strain. ”
– Expendable Mudge Muses Aloud

“The Bullet-Catcher’s Daughter is a unique and immaculately crafted novel that everyone should read, whether they’re a fantasy novice or expert.”
– The Writer’s Den

“An entertaining and convincing whodunnit involving a magic show, alchemy, the discovery of an impossible machine, and lots of lovely Victorian machines and machinations.”
– Metaliterature

“Elizabeth Barnabus might just be one of my favourite female characters of all time. The Bullet Catcher’s Daughter is an exciting, intriguing novel, full of theatrical wonders and sci-fi spectacle.”
– Why Words Work

“The Bullet-Catcher’s Daughter gets a good 4 circus tricks that Elizabeth employs to stay ahead of her pursuers out of a possible 5.”
– The Geeky Guide to Nearly Everything

“A compelling story in a fresh world with a likable heroine.”
– The Speculative Shelf