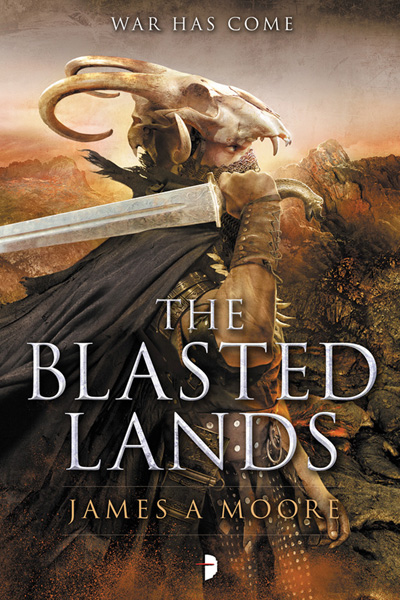 The emperor of Fellein is dead, and the newly-appointed commander may be the only one capable of keeping Fellein from annihilation, as former allies become a deadly threat. But out in the Blasted Lands, a more terrifying enemy emerges.

The second book in the Seven Forges series

The Empire of Fellein is in mourning. The Emperor is dead, and the armies of the empire have grown soft. Merros Dulver, their newly-appointed – and somewhat reluctant – commander, has been tasked with preparing them to fight the most savage enemy the world has yet seen.

Meanwhile, a perpetual storm ravages the Blasted Lands, and a new threat is about to arise – the Broken are coming, and with them only Death.

“The Blasted Lands is the example of how I want to see a sequel. Slowing the pace down somewhat, focusing on exposing the envisioned world more and more but without loosing momentum and the thread that carries the story. James A. Moore gave rise to many questions in Seven Forges and now starts answering them, he continues to develop his characters and mainly Merros and Andover’s stories were the most interesting for me, they showed so much of the world and the story, I have the same feeling of when I finished Seven Forges, it’s been a few days but the story is still racing through my mind and when I think about one scene, many follow-ups pop up. Few authors achieve to get me so addicted to their works. And well the ending. yes I am going to say it again WOW. There will be war and it wont be pretty.”
– The Book Plank

“Where Seven Forges teased a reader with the Sa’ba Taalor and their strange land, The Blasted Lands goes a long way toward fulfilling their promise, revealing much more about their culture and history as well as hinting at the origin of the waste lands themselves. And while the Sa’ba Taalor are still the stars of this show, Mr. Moore has also deftly turned the Fellein characters into more than cardboard scenery for his master race, as Drash Krohan, General Dulver and Andover Lashk shine in their own special ways. All in all, this novel was a great read, and this series is definitely one to watch for any true fantasy aficionado.”
– Bookwraiths

“From living mountains to the secret behind the veils of a nation, Moore pushes and pulls the story through questions and answers, keeping the reader on their toes. For me, The Blasted Lands is more immersive and thrilling than some of the fantasy masterpieces. Moore shapes a story which appeals to fans of all types, showing how fantasy can be a grand equalizer. The Blasted Lands does this and more, making it not just a sophomore book in a series but a genuinely good story.”
– Literary Escapism

“The end of the book had me on the edge of my seat, wanting more.  I will definitely be reading the next book in the Seven Forges series as soon as it comes out.”
– Avid Fantasy Reviews

“The race of the Sa’aba Taalor are the newest and freshest I’ve read in decades. Where many writers will have gods who are nebulous and unreachable, many of Moore’s gods respond immediately. I think I like his creatures the best – the Pra Moresh. Here Moore’s horror roots allow him to really shine. His descriptive prose and keen eye for the horrific proves that he’s a master architect of the gruesome and prognosticator of fear. I raced through the first two books and can not wait for the third. If you have yet to try these, then do so on my word. You’ll thank me for it”.
– Living Dangerously

“The Blasted Lands follows up with action, betrayal, amazing magic, gods and rituals, and a final understanding of why the Sa’ba Taalor hide their faces from those outside the Blasted Lands (and damn impressive this is). War is coming. Not if, but when, and the people of Fellein… well, it ain’t looking good. As a second book, they can sometime fall flat, but Moore just amps it up, and I flew through.”
– Amanda J Spedding
“The Blasted Lands builds on the high standards set by Seven Forges, with Moore continuing to develop his intriguing world and tell his story through some epic action set pieces.”
– Fantasy Book Review
“The novel works beautifully as a sequel. I found this an excellent book and I am anticipating the next instalment.”
– Sci-Fi Bookworm