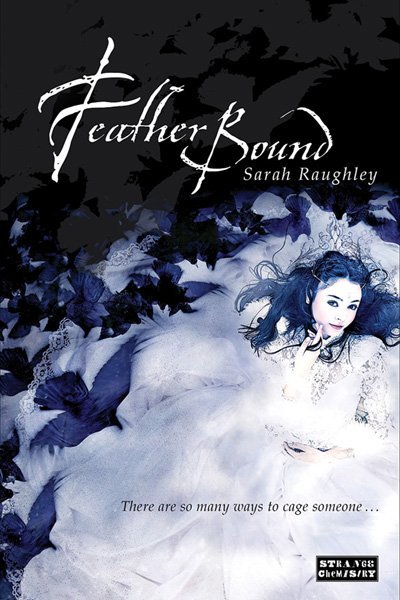 “This is one of the most powerful, beautiful, novels I’ve read this year. Am I going to keep an eye out for whatever else Raughley publishes? You bet I am! This is an author who knows what she is doing and does it well.”
– The YA Kitten

A dark debut reminiscent of Gabriel García Márquez’s A Very Old Man With Enormous Wings, and the twisted truth behind the fairy tale of Cinderella.

When Deanna’s missing friend Hyde turns up at his father’s funeral to claim his corporate empire and inheritance, she is swept into his glittering world of paparazzi and wealth.

But re-kindling her friendship and the dizzying new emotions along for the ride are the least of her concerns. Because Deanna has a secret – and somebody knows. Someone who is out to get Hyde. And if she doesn’t play along, and help the enemy destroy him…she will be sold to the highest bidder in the black market for human swans.

“I really enjoyed Feather Bound–it’s definitely a page turner! And I always love a novel with a good social justice throughline that can also balance being a genuinely fun read. I definitely look forward to seeing what Sarah Raughley does next.”
– Giant Squid Books

“I enjoyed reading Feather Bound because it is such an unusual fairytale to be written about. This meant Feather Bound was very original, and very interesting to read. I think that the myth was incorporated very well into the story.Feather Bound was intriguing, with a well-driven plot, and likeable characters.”
– Books, Food and Other Things

“I fully enjoyed the darkness to this story. I liked the gritty element of crime that ran ribbon-like through the story. And I enjoyed the concept. Thank you Sarah Raughley!”
– Jennifer Whitehead (Goodreads)

“Eye-opening  and surprising may seem to be the same descriptors but this book did both in different ways.  Great imagery is woven together with great pain and a superbly crafted cast create a humanizing story.”
– The Bedside Book Reviewer

“I loved this book. It was fast-paced, suspenseful, and imaginative. The idea of the swans and the drama that ensued kept me riveted. You should totally go read this book now. I’m looking forward to more from the author and this publishing house in the future.”
– The Library Canary

“If you don’t read Feather Bound for the gorgeously different notion of human swans and the glitz and glamour of the Upper East Side pitted against the honest grime of the poorer streets of Brooklyn, read it for the brave and deliriously tangled, twisted, tumultuous plotline threaded within and beneath the lines. This is how fairy tales should be written in the twenty-first century. And I’m all over them.”
– Jet Black Ink

Sarah grew up in Southern Ontario writing stories about freakish little girls with powers because she secretly wanted to be one. She is a huge fangirl of anything from manga to science fiction/fantasy lit to Japanese Role Playing Games but if she has to, she will swear up and down that she was inspired by Jane Austen at book signings. She imagines it sounds better than Chrono Trigger. On top of being a YA writer, she is currently completing a PhD in English, because she communicates via literary narratives, and also the sight of blood makes her queasy (which crossed medical school off the list).

Other books in Fantasy, Young Adult