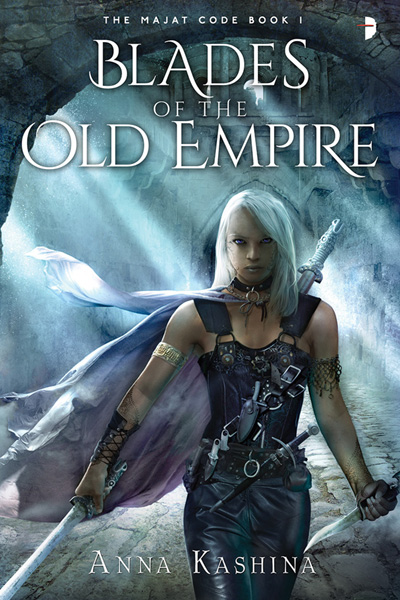 Blades of the Old Empire

The first part of brand new fantasy series The Majat Code – a tale of honour, duty and torn loyalties.

The first book in the Majat Code series

When Prince Kythar falls under attack in his own castle, he has no idea that his enemies are none other than the ancient Kaddim Brotherhood plotting to destroy his royal line. His inborn ability to control the elements is the only power that can stop this plot, but there is one problem. Kyth’s fighting skills are no match for the Kaddim, leaving him no time to put his magic to work.

To defeat the Kaddim, Kyth must rely on his bodyguard Kara, a beautiful Diamond-ranked assassin from the elite Majat Guild. But his enemies develop an elaborate plan to remove her from their way. Acting through treachery and scheming, they pitch Kara against the Majat, marking her as a target for the only warrior who can defeat her in battle. With the deadly assassin on their trail, Kythar and Kara must face impossible odds to save the kingdom and their lives.

“Escape Rating A- Blades of the Old Empire is the start of a damn fine epic fantasy series… it was pretty damn awesome.”
– Reading Reality

“If you’re in the mood for a fun fantasy with mercenaries, an evil brotherhood, then, yes, give Blades of the Old Empire a try.”
– Tenacious Reader

“Another great book from Angry Robot…I enjoyed this book and would recommend it for anyone who likes a good swashbuckling storyline.”
– Every Book Deserves to be Read

“Strong roots and parallels to history keep the reader grounded and enrich the world of this novel while magic and the characters keep it fresh and interest.”
– Heather McCorkle

“This book is action packed from the very first page, and is a good start to a series that I will look forward to reading more of.”
– Avid Reviews

“You get fast-paced travel with political intrigue and danger, amazing martial arts fights of extreme skill, cultural immersion from around the world, and a little hint of romance without ruining the tough fighter feel… I really cannot express enough times how highly I recommend this story to everyone.”
– In Pursuit of My Own Library

“Each scene is very well written. Action and dialog keep the story moving at a fast clip. The fight scenes were especially well written making it easy to see what was happening. Now I want to see what happens in the next book.”
– Mixed Book Bag

“This is a really engrossing read – and my only regret is that I left it so long to enjoy it.”
– Brainfluff

“I enjoyed my time here in this world and actually look forward to jumping in to the next two books.”
– Looking For a Good Book