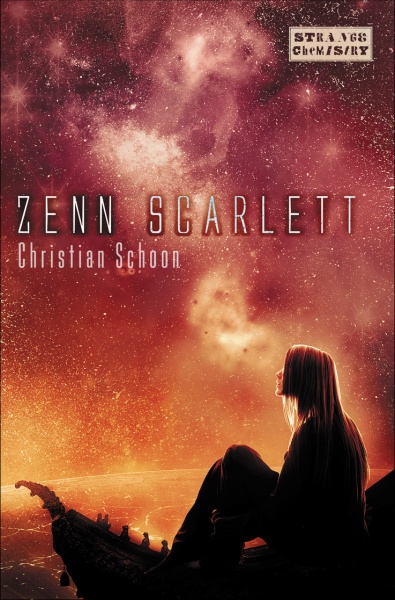 Meet Zenn Scarlett, trainee healer of alien beasties, whose life is about to get a whole lot more complicated…

Zenn Scarlett is a bright and occasionally a-little-too-smart-for-her-own-good 17-year-old girl training hard to become an exoveterinarian. She specializes in the treatment of exotic alien life forms, mostly large and generally dangerous.

Her novice year of training at the Ciscan Cloister Exovet Clinic on Mars was going well – until there are a series of inexplicable animal escapes from the school that Zenn finds herself blamed for.

As if this isn’t enough to be dealing with, her father vanishes under strange circumstances, and Zenn is worried that she has started hearing the thoughts of the creatures around her…

With the help of Liam, a towner boy, and Hamish, an alien bug also training at the clinic, Zenn must try to find her father, rescue the animals and unravel the mystery of who is behind the attacks on the school. And all without failing her first year.

“All future veterinarians will want to read “Zenn Scarlett” and her adventures with veterinary medicine on alien animals.”
– Temple Grandin, author of Animals in Translation

“Mars, monsters, and mysteries: Zenn Scarlett is a thoughtful and thrilling science fiction adventure that’s perfect for readers who think they’ve seen it all! It’s refreshing to encounter an original young adult story that defies expectations, and the breathtaking conclusion will leave you desperate for more.”
– EC Myers, author of Fair Coin and Quantum Coin

“Utterly imaginative, Zenn Scarlett is sci-fi at it’s best. Fantastic worldbuilding. Deep characters. And a story that will have you desperate for answers until the very end. I couldn’t put it down!”
– Melissa West, author of Gravity and Hover

“Overall, a very well written, intelligent book with a unique concept that I have never heard of or read before.”
– Something Beautiful

“Zenn Scarlett is a heart-pounding, heartwarming novel about facing your fears and learning how to have faith in your own abilities — no matter how young or different you may be.”
– Laura Farmer, The Gazette