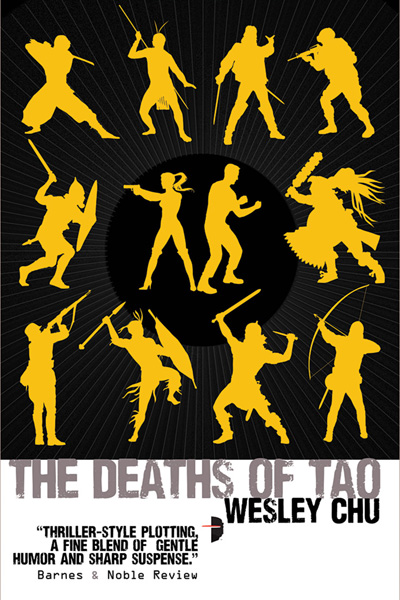 The Deaths of Tao

“Fans of the first novel will have a great time, and newcomers should have no trouble picking up the plot’s various threads as the story moves along. Great stuff.”
– Booklist

The war between the Prophus and the Genjix escalates as the battle to leave Earth enters a deadly new heights in this sci-fi thriller sequel to The Lives of Tao.

The Second Book in the Lives of Tao Series

The Prophus and the Genjix are at war. For centuries they have sought a way off-planet, guiding humanity’s social and technological development to the stage where space travel is possible.

The end is now in sight, and both factions have plans to leave the Earth, but the Genjix method will mean the destruction of the human race.

“The Deaths of Tao is as funny, loveable and entertaining as the first book, and adds even more depth to the characters, story and themes.”
– Fantasy Faction

“…the end result is a thrilling novel that without quirky aliens would sit triumphantly in Ian Fleming or Vince Flynn’s wheelhouse.”
– Staffer’s Review

“Perhaps the strongest part of The Deaths of Tao is the fact that Chu never lets the story get bogged down. Every time he takes the story forward he does it with an action scene in mind, and this trick rips the reader through from start to finish.”
– Buzzy Mag

“A great follow-up to a great book with a killer emotional ending.”
– Founding Fields

“The Deaths of Tao is one great sequel, firmly establishing Wesley Chu as one of the hottest writers in science fiction today.”
– Upcoming4.me

“The Deaths of Tao has a lot going for it, not to mention a lot going on. With the different perspectives, the alien factions in conflict, and the political and historical elements – there was literally never a dull moment.”
– My Shelf Confessions

“Wesley Chu has developed something of a rarity in which there is a mixture of action, espionage, humor, and some romance that blends very smoothly together and gets the reader interested in the characters themselves and not just the endgame of the book.”
– Comic Book Therapy

“A decent sequel whose ending made me want to pick up the last book right away.”
– It’s All About Books

“Chu knows how to blend humor, thrills, terror and romantic angst into one entertaining package, and I can’t wait for more.”
– Books, Bones, & Buffy

“It accomplishes that which you rarely see in a sequel: it surpasses the first book. Funny and poignant, at times heart-wrenching, this was a kindle bruiser as I had to read on.”
– TiffyFit

“Jam-packed with espionage and intrigue, intense action and fighting scenes punctuated by humor at just the right moments, and characters that are well worth becoming emotionally invested in, it never seems to falter in pace or flow. Joy, hope, humor, fear, sadness, are all expertly conveyed, sometimes even within a single paragraph.”
– Allwaysunmended

“Wesley Chu obviously is a host for a Quasing of superior power, fans of book one will not be disappointed, his ability to not only craft an intelligent sci-fi but include historical features, humour and tie it up neatly into a mile a minute spy thriller, the fellow is certainly rather talented.”
– Sleeping Muses

“Wesley Chu has proven his versatility with his sophomore effort and all his gambling appears to have paid off. His status as a rising star in the genre world hasn’t dimmed a Watt.”
– The 52 Book Reviews

“While The Lives of Tao was fun, The Deaths of Tao is fascinating. It looks like Chu has taken everything he learned from writing the first book, polished it, and really threw himself into the task of writing something with more depth and a harder edge.”
– Bookworm Blues

“The Deaths of Tao was a wild, action-packed ride that had me on the edge of my seat the entire time. There NEEDS to be a third book. The last couple pages had some absolutely crazy plot twists and I need more.”
– Sarah Says Read

“The Deaths of Tao turned out to be a worthy follow-up to its predecessor! In many ways, I liked it even more than the first book; after all, the scope of the story has gotten bigger, but it still retains all the humor and action that first drew me in.”
– Bibiliosanctum

“For fast paced, extraterrestrial action and adventure sure to endure the test of time and the science fiction genre. Excellently written with a great sense of urgency and characters that are organic in their evolution, The Deaths of Tao is a Fall must-have sequel.”
– Toonari Post

“The shades of grey in all of these issues are what make the story so interesting. Decisions and mistakes are made by everyone, but beyond that, everyone’s making their own choices at the same time. It’s all so very dramatic. I love it.”
– Over the Effing Rainbow

“This time around, the storytelling is more dramatic, the action is far more brutal and the stakes are a hell of a lot higher.”
– Every Read Thing

“The ending was jaw dropping, to say the least.”
– Shelf Inflicted

“Chu’s writing style is very easy to read, and the action flows steadily on. I look forward to seeing what he does in the future.”
– Being a Big Sandwich

“The Deaths of Tao is just as explosively written, thrilling, and fun as its predecessor. Thank you Wesley Chu! Often times sophomore efforts are easy to pass over, become unnecessary or obscure. The Deaths of Tao is an exception to that rule.”
– Patrice’s Reading Corner!

“I highly recommend both books as well thought-out alien science fiction. I would imagine we haven’t seen the last of Tao. Or have we?”
– Troubled Scribe

“Having not read the first book in this series made this book all that more impressive to me. I was coming to the world, characters, and setting completely fresh and the author effortless made me aware of everything that I needed to know to enjoy the story.”
– Among the Wreckage

“As I finish this discussion of Deaths of Tao I realize there’s not the kind of effusive joy that followed my reading of Chu’s debut. It may come across as disappointment. Nothing could be further from the truth. It is a fundamentally different kind of novel, one focused on story telling, not low hanging nerd-makes-good fruit that so appeals to genre readers. Simply put, Wesley Chu leveled up as a writer. If his third book can capture the magic of the first with the technical execution of the second, he’ll be among the elite.”
– Staffer’s Book Review

“Looking for a good book?  The Deaths of Tao by Wesley Chu is a thrilling, original modern/urban sci-fi book that will grab your attention and keep you reading all the way in to the next book.”
– Looking For a Good Book?

“Exciting and edge-of-your-seat compelling.”
– Fangs for the Fantasy

“Go forth and read. And believe. And have fun..”
– Neth Space

“Chu has a wonderful ability to blend action and suspense with humor and sweetness. This is, hands down, a great book to read. I highly recommend you read the first book, The Lives of Tao, first.This whole series has proven to be highly entertaining of 5 hoots!”
– Purple Owl Reviews