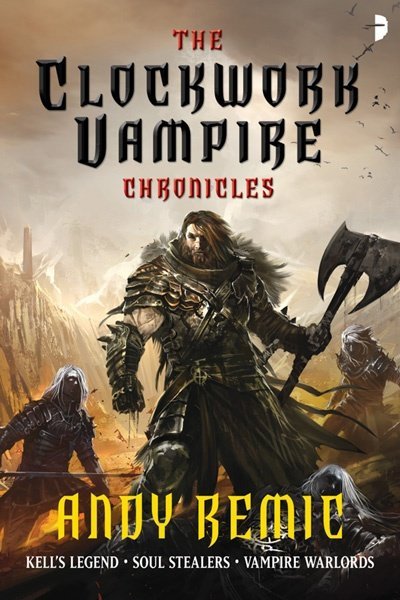 “For anyone who is missing their David Gemmell fix.”
– io9.com

Fighting their way south, betrayal follows battle follows deviation, and they are attacked from all quarters by deadly albino soldiers, monstrous harvesters who drain blood from their victims to feed their masters, and the twisted offspring of deviant vachine, the cankers.

As Falanor comes under heavy attack and crushing invasion, only then does Nienna learn the truth about grandfather Kell – that he is anything but a noble hero, anything but a Legend.

“Kell’s Legend is loosely based on the traditional fantasy story, brave but world weary warrior type who just wants to retire from any bloodshed and finds himself forced to use his talents of destruction. This tradition though is then bashed on the head and burried 6 feet deep with inclusion of the clockwork vampires creating a blend of fantasy horror and fantastic fight scenes. I mean really top quality fight scenes. One of Gemmell’s most redeeming qualities as an author was his ability to write about fighting and war to such a degree that you almost felt like rushing through his novels to get to those bits. Kell’s Legend fight scenes live up to this quality and elevate the novel way above the standard fare. Kell’s Legend is a novel of power and scope, able to stand as a worthy successor to the Gemmell crown. 5***** “
– Science Fiction & Fantasy Books

“Kell’s Legend is a blistering read; the pace is frenetic and the action scenes come thick and fast. He’s clearly honed his craft of creating pulsating action scenes during the writing of his military SF novels, for the fight sequences are often electrifying. The Vachine are a great creation, being a technologically advanced race whose members are half flesh, half clockwork, while the cankers – the result of failed clockwork experiments – are another excellent touch. The whole clockwork element is not just there for show – it provides the motivation for the Vachine’s invasion, and is also behind one the best (and most disturbing) scenes in the book. Andy Remic may have seemed like an unlikely writer to snatch up Gemmell’s battleaxe and continue to carve the fine tradition that the great man started, but he does a surprisingly good job of it. Kell’s Legend is a rip-roaring beast of a novel, a whirlwind of frantic battles and fraught relationships against a bleak background of invasion and enslavement. In other words, it takes all the vital ingredients for a good heroic fantasy novel and turns out something very pleasing indeed. If you can keep an open mind then you may get a real kick out of one of the most surprising novels of the year.”
– Speculative Horizons

“Kell’s Legend is an iconoclastic melange of themes that incorporates devices from various genres– Moorcook / Gemmell heroic fantasy, steampunk, and horror. It is an exciting, brutal novel, soaked in testosterone and paced like a roller coaster. The sex and violence is visceral and the action is non-stop.”
– Red Rook Review

“Soul Stealers is fast, brutal and above all unmissable, there is quite simply nothing out there that can currently compare to Andy Remic’s unrelenting, unforgiving and unflinching style. The new King of Heroic Fantasy has arrived. 5 *****”
– SFBook.com

“Remic’s writing style … [is] over the top, with occasional tough humour. This novel is a steampunk rollercoaster, with clockwork vampires and rococo trimmings… Remic’s book makes me think of BDs from the eighties. Maybe it’s time I re-read those French cartoons. It’s a good sign, isn’t it, when reading one book instantly leads to re-reading something you’ve enjoyed, something equally over-the top, colourful and large?”
– Gillian Polack

“Andy Remic has to be given credit for his unflinching style which is certainly not for everyone. The action and gore levels are increased , while the characters are all tested and reveal more about themselves… The action and snappy dialogue are all here. This book delivers exactly what its predecessor promised: the ability to bewitch the reader and to turn your expectations upside down.”
– Fantasy Book Critic