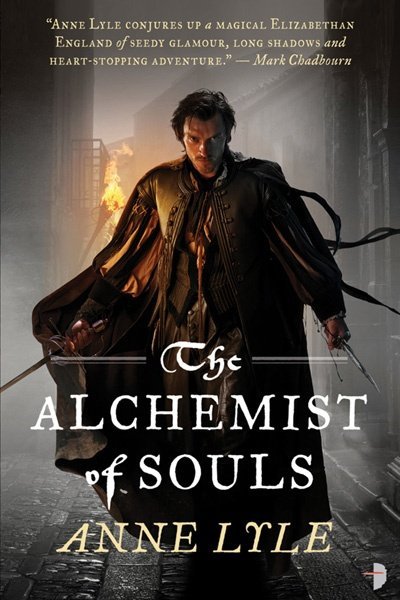 “With a twisting plot, endearing characters, fast-paced action, and truly unique and alien “fey”, Lyle steps up and gives notice to the genre. No wilting faerie queens and tortured knights here: this is how historical fantasy gets dirty.”
— Douglas Hulick, author of Among Thieves

Mal Catlyn stars in the first part of a brand new Elizabethan alt-historical fantasy saga.  The faerie-like skraylings seem to be a friendly race – but appearances can be deceptive…

The First Book in the Night’s Masque Series

“In her terrific debut novel, Anne Lyle conjures up a magical Elizabethan England of seedy glamour, long shadows, pulsating romance and heart-stopping adventure.
The Alchemist of Souls is the calling card of a great new talent in the fantasy field.”
– Mark Chadbourn, author of The Sword of Albion

“Anne Lyle’s fluid writing brilliantly evokes the heady and gritty atmosphere of her alternate Shakespearean London – from the day-to-day life of theatre troupes to the pomp of official ceremonies.”
– Aliette de Bodard, author of the Obsidian and Blood series

“Murder, mayhem and intrigue at the court of Elizabeth I. All this and magic too makes for a great read.”
– Mike Shevdon, author of Sixty-One Nails

“A rich historical setting, some gloriously ambiguous characters, and a whole lot of unexpected surprise collide to make this unmissable for any fan of historical fantasy.”
– Jacob Topp-Mugglestone, Drying Ink

“A fantastic, original piece of historical fantasy that makes Lyle a début author to watch out for in 2012.”
– Bane of Kings, The Founding Fields

“I would definitely rate The Alchemist of Souls as one of the best novels of the year and I highly recommend that everyone go and grab the novel when it is released.”
– Shadowhawk, The Founding Fields.

“Mysterious circumstances combined with historical authenticity and the strange, Anne Lyle’s The Alchemist of Souls is a 2012 debut I can strongly recommend.”
– Justin, Staffer’s Musings

“…a beautifully written story of intrigue, hatred, mystery and love.”
– Erik Lundqvist, I Will Read Books

“An outstanding debut and Lyle is certainly a name to watch for the future. I thoroughly enjoyed it.”
– Carl Barker, for The British Fantasy Society

“If you like good fantasy or historical fantasy, pick this book up!”
– Sci-Fi Fan Letter

“Anne Lyle’s writing is beautiful, elegant and gripping; be prepared to be swept away to a rich and colourful depiction of a different Elizabethan England, where treachery and danger abound.”
– Leo Elijah Cristea

“This is a fun romp through Tudor England, filled with mythical creatures, swordsmen, and theatre-types. The characters are well-rounded and compelling, and there is a very real urgency to the plot.”
– Janea at The Ranting Dragon

“Anne’s writing style is beautifully descriptive … I’ll definitely read on in the series!”
– Nina at Death, Books and Tea

“An intricate story of political intrigue in an alternate Tudor London, Anne Lyle’s The Alchemist Of Souls is an engaging fantasy novel. I give it 8 stars.”
– Alisa at The Book Bundle

“A gem of a first novel … I felt as if I walked those smelly Tudor streets as strongly as I’ve felt it reading writers like Mantel or Peter Ackroyd … Anne Lyle has given us the Elizabethan London we know from reading history and Shakespeare; but she’s also created a London that has just enough strangeness in its shadows to keep us anticipating wonder.”
– Richard Kellum, Elf Machines From Hyperspace

“My only complaint about this novel is that it was over too quickly. My first read was in one sitting over about 6 hours. It is addictive, the characters make you care, and the setting is beautiful. What more can you ask for from a novel?”
– Lor Graham, for Wilder’s Book Reviews

“Mysterious circumstances combined with historical authenticity and the strange, Anne Lyle’s The Alchemist of Souls is a debut I can strongly recommend.”
– Aidan Moher, A Dribble of Ink

Anne Lyle was born in what is known to the tourist industry as "Robin Hood Country", and grew up fascinated by English history, folklore, and swashbuckling heroes. Unfortunately there was little demand in 1970s Nottingham for diminutive female swordswomen, so she studied sensible subjects like science and languages instead. It appears that although you can take the girl out of Sherwood Forest, you can't take Sherwood Forest out of the girl. She now spends every spare hour writing (or at least planning) fantasy fiction about spies, actors, outlaws and other folk on the fringes of society. Her Night's Masque series is set in an alternate history Elizabethan England, where the Virgin Queen married and had children while fanged and tattooed creatures from the New World walk the streets of London. Anne lives in Cambridge, a city full of medieval and Tudor buildings where cattle graze on the common land much as they did in Shakespeare's London. She prides herself on being able to ride a horse (badly), sew a sampler and cut a quill pen but hasn't the least idea how to drive one of those new-fangled automobile thingies.