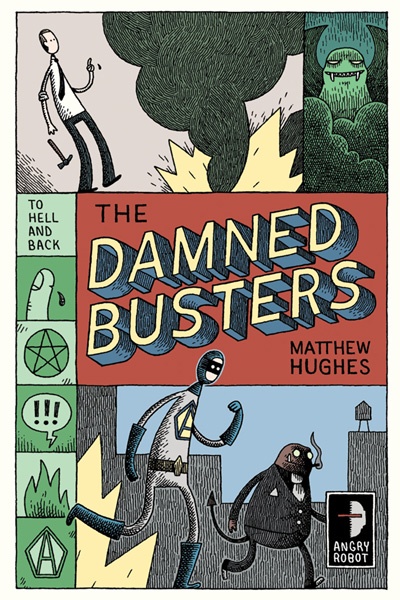 The Actionary Saves the Day!

“Hughes continues to carve out a unique place for himself in the fantasy-mystery realm. A droll narrative voice, dry humor and an alternate universe that’s accessible without explicit exposition make this a winner.”
– Publishers Weekly

File Under: Fantasy [ Expletives Deleted | Up, Up And Away | Endless Loveliness | Life’s Great Author ]

The First Book in the To Hell and Back Series

Buy the ebook version now – only £3.99
SKU: AR9780857661043
Category: 2011, Action, Adventure, Fantasy, Humour, Mystery, Super Powers, Superheroes, Trilogy, Urban Fantasy Tags: Out Now.
When mild-mannered Chesney Arnstruther accidentally summons a demon and causes Hell to go on strike, he doesn’t expect to wind up as what he had always dreamed of being: the Actionary, a costumed crimefighter with a weasel-headed fiend for a sidekick.
But that’s just the beginning of a journey that will see the “high-functioning” autistic actuary enmeshed in the schemes of a greedy televangelist, romancing a pepper-spray-wielding manicurist, and sitting down to a poker game with the Devil where the stakes include his immortal soul.

“This is a funny and surprisingly endearing book with some interesting discussions about the role of sin and our reactions to it.”
– Keith Brooke in The Guardian

“Since I’ve been ‘sinning’ and eating cheese, which I shouldn’t I’ll compare this story to a cheddar cheese (which I do love). It’s not like Velveeta which casts aspersions on the good name of cheese. Nor is it some cheap plasticky, slightly bouncy orange-colored thing. It’s not a Kraft cheese nor one you would find in most chain grocery stores. It is a cheese of respectable lineage from a specialty shop; a tongue tingling, well-aged, firm cheddar where the cows were sung to every morning while they were being milked. I’d give The Damned Busters a solid eight cheese wheels worth of fun and entertainment. A Hell of a good read.”
– Colleen Anderson

“Matthew Hughes has accomplished something unique: he has written a novel, without illustrations, that conveys the tone and feel of comics published during their Golden Age.”
– Red Rook Review

“Hughes’ writing is both funny and clever, with some great descriptive passages. He has a style that instantly hooks the reader, that manages to balance the fine line between being a funny novel, and novel that is just full of jokes… I will be picking up the next instalment of this series without a doubt. A highly recommended read.”
– Ginger Nuts of Horror

“The Damned Busters is a supernatural adventure that blends a rich and unpredictable story, with a tone and wit that provides plenty of laughs along the way. A great balance of action and comedic situations with some romance thrown in for good measure, albeit an awkward romance, this is a great read. It will forever contain the most intense game of poker I have ever read. 5 *****”
– Celebrity Cafe

“This story starts out as a tongue-in-cheek humorous parody of the relationship between humans and demons, until a sharp twist turns religion upside down. The premise is bold, thought-provoking, and original.”
– Tangent Online

“You’re missing out if you haven’t bought this book yet. Pure and simple.”
– The Founding Fields

“The book is an insane adventure that messes with your mind and its perceived notions of the world around us. It feels like watching The Matrix when you learn not everything is as it seems. The writing is smart, never once assuming that the reader is an idiot, and the dialogue is brilliant and witty.”
– 42 Webs