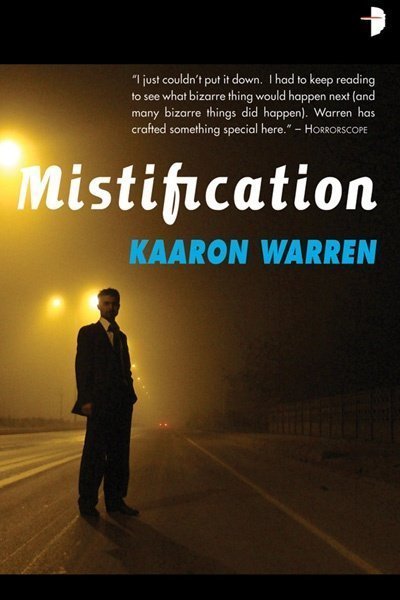 “Kaaron Warren is a fresh, amazingly talented voice out of Australia. You must read her work.”
– Ellen Datlow

Marvo is a stage magician. His magic is real.

File Under: Fantasy [ True Magic | Find the Lady | All is Illusion | Bring the Mist ]

Marvo is a stage magician. His magic is real.

The magicians have always been with us, since the beginning of civilisation. They fill our heads with the mist, keeping us from witnessing the stark reality of existence. But are things so bad that Marvo will bring it down on all of us, forever?

Marvo begins to understand those around him, and his place in the world; he discovers that his remarkable powers can be put to good, or to evil.

He only has to choose…

“Like walking from a dream into a mythical land both familiar and delightfully strange. A tale of tolerance and survival, in a fascinating and beautifully realised world.”
– Trudi Canavan, author of the Black Magician series, on Walking The Tree

Chosen for the Locus Magazine ‘Best Fantasy of 2011’ list

“Mistification begins marvelously, austere and mysterious, and it ends on a truly grand conjuration laden with emotional resonance. Warren saves her best trick for the encore performance, and it sounds out a note of such tremendous follow-through, finally, that judged only on its first and last acts, Mistification could be among the year’s most powerful dark fantasies.”
– Strange Horizons

“Mistification is a book like no other. That sounds cliché, but in this case it’s absolutely true.”
– A Fantastical Librarian

“The ending is startling and strange. The imagery and events put me in mind of a certain religious story, but this isn’t in your face and readers are left to draw their own conclusions about what this means. There’s certainly a lot to think about…”
– Ros Jackson, WarpcoreSF

Slights is Kaaron’s first novel, the first of three jaw-dropping books to be published by Angry Robot. Her award-winning short fiction has appeared in Year's Best Horror & Fantasy, the Poe and Haunted Legends anthologies, Fantasy magazine, Paper Cities, and many other venues in the US, Europe and Australia. Her short story "A Positive" has been made into a short film called Patience, and her first ever published short story "White Bed" was dramatised for the stage in Australia.

She is currently working on a novella about the goddess Ishtar, and a novel about the washerwoman in history. She's an Australian, based in Fiji when we met her but now back home in ACT. Other random stuff she told us ~ I always wanted to be famous and changed the spelling of my name for that reason. There were too many ‘Karens’ in the world and I wanted to stand out. ~ My favourite kind of lolly (sweetie) is a hard one gone soft. Think Blackpool rock you can chew. ~ I’m an extremely bad drawer but I draw deliberately worse to make my children laugh. Can’t have them thinking I’m perfect. ~ I wrote my first novel at 14. Called Skin Deep, it was inspired by S.E.Hinton's The Outsiders. It might have been published if I'd been able to type faster. ~ I see stories everywhere, even in the names of birds. I have "spine-tailed swift" in my ideas notebook. ~ I love to read anything and everything. Weird specialist magazines are a fave. I love the secret language they use, and the way people can be famous in their field but unheard of elsewhere.