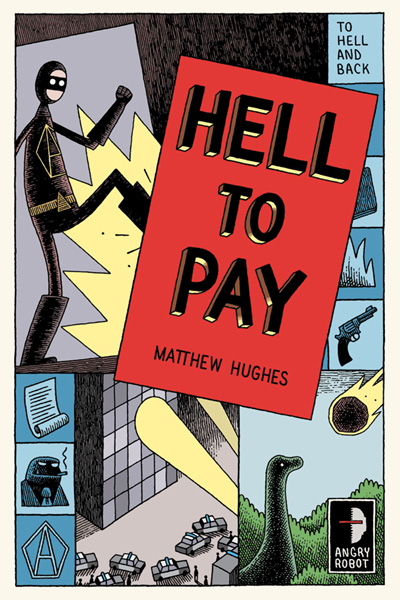 The Actionary: To Be or Not To Be?
The epic conclusion to the brilliant To Hell and Back series – a trilogy that does for autism what Flowers for Algernon did for intellectual disability

“Hughes continues to carve out a unique place for himself in the fantasy-mystery realm.
A droll narrative voice, dry humor and an alternative universe that’s accessible without exposition make this a winner.”
– Publishers Weekly

The third book in the wondrous To Hell & Back series

Being a crime-fighting superhero with a demon sidekick is not as much fun as Chesney Arnstruther thought it would be. Nor is having his autism “healed” by the historical Jesus.

To make things worse, he’s zeroing in on the metaphysical truths behind the notion that reality is a book constantly being rewritten by a deity exploring the nature of good and evil. Satan and the Messiah are holed up in Eden writing fresh chapters, and Chesney’s quest takes him to ancient Babylon and Rome, and into a deep-past encounter with a tribe of God-worshipping dinosaurs.

“I love it when an author reveals that there’s been a bigger story behind the individual books’ plots. Hughes never hid this, but each new book shows new layers and tie them all together.”
– Annie Smith, Summer Reading Project

“The first book in the series was very good, the second was better. The events of those books were leading up to this final volume in the trilogy and it’s the best yet.”
– Dave Brzeski for The British Fantasy Society

“A highly enjoyable read, with some interesting philosophical underpinnings and surprising twists. The book makes for a satisfying ending to the To Hell & Back series, which gave us a quirky, off-beat story about an unlikely super hero, with unexpected depths.”
– Mieneke vam der Salm, A Fantastical Librarian

“Those who read the first two books from this Canadian author will jump on the third one but for those of you looking for something original and amazing to read that looks at everything we are and twists it – give To Hell and Back a shot.”
– Tome of Geek

“This final volume builds up to a pleasing metafictional climax in an alternate universe where God was trying out a different approach before our current reality. It’s great fun.”
– David Marshall, Thinking About Books

“I adored this book. It was darker and more serious than I expected but not without taking away from what I loved.”
– Don’t Panic