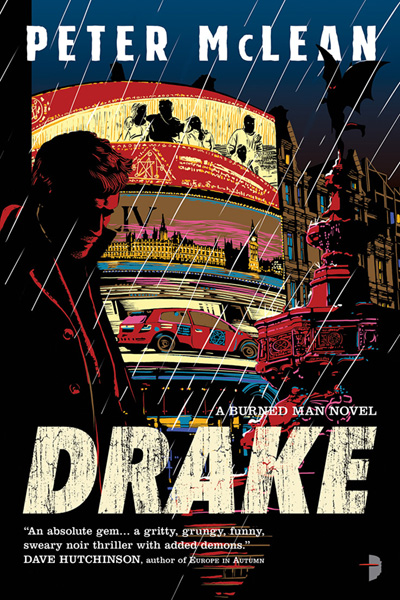 A sorcerer hitman in South London takes out the wrong target and ends up in the crosshairs when he tries to do the right thing for once.

The first book in the Burned Man series

Rescued by an almost-fallen angel called Trixie, Don and his magical accomplice the Burned Man, an imprisoned archdemon, are forced to deal with Lucifer himself whilst battling a powerful evil magician.

I have to say, I really enjoyed this novel. When the story first opened, I thought Drake was going to be just another stoic Sam Spade type. Not so! Imagine if Jesse Pinkman, the young, sensitive delinquent hero of Breaking Bad, was in the soul-destroying business of dark magic instead of making meth. Drake is a bang-up job indeed.”
– Village Book Review

“McLean’s vision of London is a city of violence, substance abuse and foul language. Personally, I loved it all. I’m all for demons embracing their demonic side and if that means them ripping off someone’s arm and then smacking them with the wet end, then so be it.”
– The Eloquent Page

“I really enjoyed this novel and I highly recommend it to anyone who loves noir urban fantasy with a different twist than the usual.”
– Best Fantasy Books

“The ending is a far different place from where this book began, which is a testament to the author and the plot threads that evolve through the book and stellar worldbuilding.”
– Pop.Edit.Lit

“The plot moves quickly and consistently to the end where – pleasingly unpredictably – the story is left happily concluded yet unresolved enough to welcome in the next Don Drake adventure, which no doubt will be as entertaining as this one.”
– The British Fantasy Society

“This is a really good book, especially for the start of a series, and from a new writer.”
– Sci-Fi and Fantasy Reviewer

“The Burned Man books are shaping out to be an interesting spin on the urban fantasy tale. You have the elements of a classic noir story like a down on his luck guy, a mysterious beautiful woman and a sort of mob boss figure. But then you have the whole demonic angle to things that turns things on its head and makes it unique.”
– The Geeky Guide to Nearly Everything