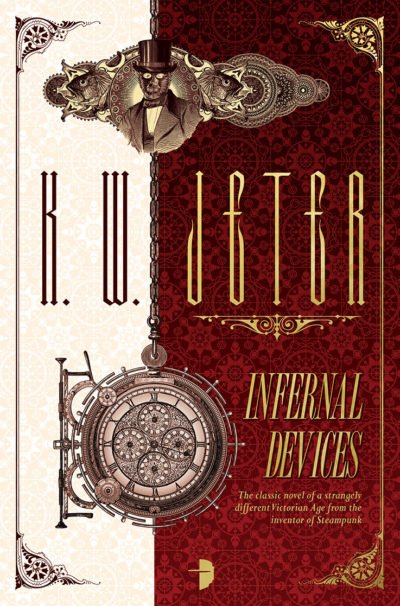 “This is the real thing – a mad inventor, curious coins, murky London alleys and windblown Scottish Isles … a wild and extravagant plot that turns up new mysteries with each succeeding page.”
– James P Blaylock

A steampunk classic from the father of the genre – a classic tale of time travel, clockwork and sexual intrigue.

The first book in the George Dower Trilogy

When George’s father died he left George his watchmaker’s shop – and more.

But George has little talent for watches and other infernal devices. When someone tries to steal an old device from the premises, George finds himself embroiled in a mystery of time travel, music and sexual intrigue.

The classic steampunk tale from the master of the genre.

K W Jeter has created quite a marvelous world in Infernal Devices. Sometimes rather weird and alien but always consistent.”
– The Traveler’s Steampunk Blog“

This is the real thing – a mad inventor, curious coins, murky London alleys and windblown Scottish Isles… A wild and extravagant plot that turns up new mysteries with each succeeding page.”
– James P Blaylock, author of Homunculus and Under London

“Jeter is an exhilarating writer who always seems to have another rabbit to pull out of his hat.”
– The New York Times Book Review

Other books in Steampunk, Trilogy