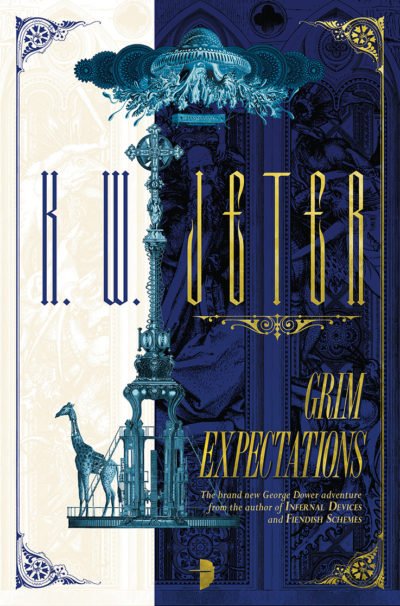 A mind-boggling new novel in Jeter’s iconic steampunk series, to celebrate thirty years of Steampunk. A death-bed gift leads a man into a mysterious quest for a missing person when a puzzle box opens to reveal letters from an unknown acquaintance. But they’re not love letters. They’re clues.

The third book in the George Dower trilogy

Some time after the events of Fiendish Schemes, George Dower finds himself a widower, of sorts. On her deathbed, Miss McThane entrusts Dower with a small, ticking clockwork box. The box is mysteriously linked to her.

When she breathes her last, the box stops ticking and Dower is able to open it, to find hundreds of letters – written in an unknown hand, signed only with the initial S. They’re not love letters, but refer instead to the letter-writer’s ongoing search for some other person. The last is a simple note, reading “Found him”…

“Its warped humor, digs at steampunk literature, and sheer tonnage of weirdness conveyed through Dower’s polite Victorian speech combine to create an unnerving tale that is also, at turns, incisive and deliciously twisted. It’s a horror novel in which the monster is, in fact, the whole world, and the inevitable march of steam-powered progress, issuing both a brutal epitaph to the genre Jeter helped bring to prominence, and a challenge for others to push it into stranger waters. From one of the masters of the form, we should expect nothing less.”
– Barnes & Noble Sci-Fi & Fantasy Blog

“At times morbidly hilarious and at others thought provoking as to the role of scientific advancement in our society, Grim Expectations is a worthy successor to Mr Dower’s earlier adventures and promises a wild ride for the audience. 5/5 stars”
– San Franciso Book Review

Praise for the George Dower Trilogy