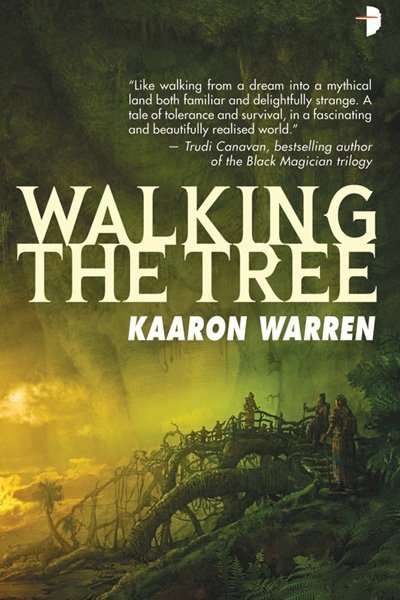 “Like walking from a dream into a mythical land both familiar and delightfully strange. A tale of tolerance and survival, in a fascinating and beautifully realised world.”
— Trudi Canavan, author of the Black Magician Trilogy

Botanica is an island, but almost all of the island is taken up by the Tree…

File Under: Fantasy [ A Stunning World | An Incredible Journey | A Terrifying Secret | Ghosts in the Tree ]

Botanica is an island, but almost all of the island is taken up by the Tree.

Little knowing how they came to be here, small communities live around the coast line. The Tree provides them shelter, kindling, medicine – and a place of legends, for there are ghosts within the trees who snatch children and the dying.

Lillah has come of age and is now ready to leave her community and walk the tree for five years, learning all Botanica has to teach her. Before setting off, Lillah is asked by the dying mother of a young boy to take him with her. In a country where a plague killed half the population, Morace will otherwise be killed in case he has the same disease. But can Lillah keep the boy’s secret, or will she have to resort to breaking the oldest taboo on Botanica?

“Kaaron Warren is a fresh, amazingly talented voice out of Australia. You must read her work.”
– Ellen Datlow

“It is the setting that really makes the story and keeps the reader interested. The various communities of Botanica are well thought out and intriguing, and their differing attitudes towards disease, sex and the Tree constantly challenge Lillah’s thoughts and beliefs. It also draws on our own awareness of humanity’s evolution, and adds a sense of reality to the already convincing setting.”
– Total SciFi Online

“As a science fiction travelogue, Walking the Tree truly flourishes. The worldbuilding is lush, exquisite, and hypnotizing. It’s rare that a non-plot-driven book can be such a page-turner; each community was so fascinating that I could not wait to see the next.”
– Benni’s Book Biters

Slights is Kaaron’s first novel, the first of three jaw-dropping books to be published by Angry Robot. Her award-winning short fiction has appeared in Year's Best Horror & Fantasy, the Poe and Haunted Legends anthologies, Fantasy magazine, Paper Cities, and many other venues in the US, Europe and Australia. Her short story "A Positive" has been made into a short film called Patience, and her first ever published short story "White Bed" was dramatised for the stage in Australia.

She is currently working on a novella about the goddess Ishtar, and a novel about the washerwoman in history. She's an Australian, based in Fiji when we met her but now back home in ACT. Other random stuff she told us ~ I always wanted to be famous and changed the spelling of my name for that reason. There were too many ‘Karens’ in the world and I wanted to stand out. ~ My favourite kind of lolly (sweetie) is a hard one gone soft. Think Blackpool rock you can chew. ~ I’m an extremely bad drawer but I draw deliberately worse to make my children laugh. Can’t have them thinking I’m perfect. ~ I wrote my first novel at 14. Called Skin Deep, it was inspired by S.E.Hinton's The Outsiders. It might have been published if I'd been able to type faster. ~ I see stories everywhere, even in the names of birds. I have "spine-tailed swift" in my ideas notebook. ~ I love to read anything and everything. Weird specialist magazines are a fave. I love the secret language they use, and the way people can be famous in their field but unheard of elsewhere.