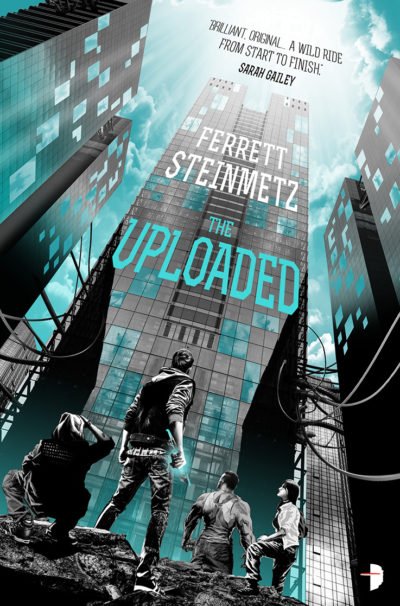 “Steinmetz has crafted a brilliant, original world in this all-too-possible story of life, death, and legacy. The Uploaded is a wild ride from start to finish, and asks the reader to examine what exactly it is that they are leaving behind — and what they’re headed toward.”– Sarah Gailey

The world is run from the afterlife, by the minds of those uploaded at the point of death. Living is just waiting to die… and maintaining the vast servers which support digital Heaven. For one orphan that just isn’t enough – he wants more for himself and his sister than a life of servitude. Turns out he’s not the only one who wants to change the world…

Life sucks and then you die…

In the near future, the elderly have moved online and now live within the computer network. But that doesn’t stop them interfering in the lives of the living, whose sole real purpose now is to maintain the vast servers which support digital Heaven. For one orphan that just isn’t enough – he wants more for himself and his sister than a life slaving away for the dead. It turns out that he’s not the only one who wants to reset the world…

“There are shades of The Hunger Games; a Max Headroom-style stuttering virtual character; a juicy, well-plotted love triangle; and loads of action that takes place in between.”
– SFX Magazine

“In the grand tradition of thoughtful future science fiction that comments on our present, it’s as pointed a social satire as you’re likely to find this side of the Upterlife.”
– Barnes & Noble Sci-Fi & Fantasy Blog

“I’ve said it before and I’ll say it again: this guy should be a super-bestseller. There’s no good excuse why he isn’t. I’m a total fanboy because he’s just got the writing chops to pull just about anything off.”
– Brad K Horner

“A great standalone with exceptional world building. Books like this are why I read science fiction: huge ethical questions, dark not entirely unfamiliar worlds and massive concepts. A great book, and definitely one that will have me searching out Steinmetz’s back catalogue.”
– Moon Magister Reviews

“If you enjoy dystopian science fiction reads with plenty of action, then I recommend this one.”
– Brainfluff

“Steinmetz is a clever writer indeed. He has hidden an examination of one of mankind’s biggest questions (what happens when you die?) in a novel filled with plenty of action, snarky characters, and a lovable pony sidekick.”
– Speculative Chic

“I pretty much love everything I’ve read from Ferrett Steinmetz, and The Uploaded is no exception.”
– Pop Culture Beast

“A great standalone with exceptional world building. Books like this are why I read science fiction: huge ethical questions, dark not entirely unfamiliar worlds and massive concepts.”
– Lord Belatiel

“It has a really interesting idea behind it and world and characters are fun. So give it a try.”
– Being a CFO

“It’s over-the-top. It’s funny, moving, tragic, and eventually triumphant, though at high cost for all the characters. It’s cleverly and skilfully written.”
– The Review Curmudgeon

“The world building was great and some of the concepts scarily real. A completely different novel from the author of Flex, The Flux, and Fix (which I highly recommend checking out).”
– Just A Guy Who Like To Read

“ A book that made me think a lot, which is something I also enjoyed.”
– My Bookish Dream

“Flex is a real gem – sharp, weird, and wildly innovative. It zigs when you think it’ll zag, then tricks you into screaming when you’re ready to laugh out loud. So drop everything and settle in for the night – because once you open this one, you’re not going anywhere.”
– Cherie Priest, author of Boneshaker, winner of the Locus Award for Best Novel and the PNBA Award, and nominated for a Nebula Award and a Hugo Award.

“Amazing. I have literally never read a book like this. Read this NOW, if only to be forced to turn the page wondering what the hell Steinmetz is going to come up with next.”
– Mur Lafferty, Campbell award-winning “Best New Writer 2013” and author of The Shambling Guide to New York

“Featuring one of the most original magic systems ever devised and a pair of likeable, layered protagonists, Flex is a fast-paced, imaginative, and emotionally engaging adventure. The developing friendships and rapport among the characters are portrayed with sensitivity and avoids cliches, and the magical battle sequences are rigorous and filled with ingenious touches that will make gamers and tax lawyers alike grin with joy.”
– Ken Liu, winner of the Nebula, Hugo, and World Fantasy Awards