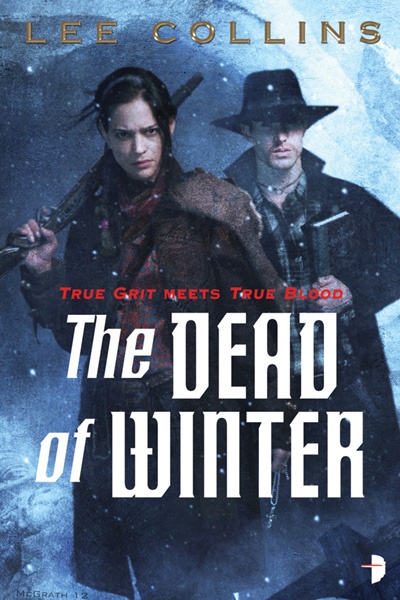 The Dead of Winter

“From its opening chapter, The Dead of Winter lassoed me into its gritty world of gunslingers and demons. A page-turning thrill ride of a novel that could well redefine your perception of the ‘wild’ west.”
– Rio Youers, author of Westlake Soul

Cora and her husband hunt things that shouldn’t exist in this weird western debut from Lee Collins.

Cora and her husband hunt things – things that shouldn’t exist.

When the marshal of Leadville, Colorado, comes across a pair of mysterious deaths, he turns to Cora to find the creature responsible. But if Cora is to overcome the unnatural tide threatening to consume the small town, she must first confront her own tragic past as well as her present.

“The Dead of Winter ain’t your granddad’s Western. Lee Collins paints a picture of the Colorado wilds as cold and unforgiving as the creatures that inhabit them. And in Cora Oglesby, Collins has created a heroine as tough as saddle-leather, and as fiery and sharp as rotgut whiskey. Read it with the lights on – but for damn sure read it.”
– Chris F Holm, author of Dead Harvest and The Wrong Goodbye

“I got a lot out of this brooding supernatural Western tale that turns in your grasp and bites you like a rattlesnake when you’re least expecting it. The Dead of Winter (a title you’ll appreciate more once you’ve read the book) is a gripping read that has left me eager for the sequel.”
– Graeme Flory, Graeme’s Fantasy Book Reviews

“Stunning, mind-blowing, amazing, fan-frikkin-tastic. None of those word can convey just how much I liked The Dead of Winter. I can’t even tell, although I know better, that this novel is a debut and not an author’s best at the peak of his career.”
– Shadowhawk, The Founding Fields

“An exciting action-packed adventure which adds vampires and creatures to the Wild West and let’s rip! The Magnificent Seven crossed with Buffy, this is very a much read for those who want more action and less angst in their Vampire and Monster Slaying.”
– Mel’s Random Reviews

“I would recommend this book if you like a bit more from vampire stories than pouting teenagers.”
– Phil Andorra, Terror Tree

“The Dead of Winter reads more like an action-adventure novel. There is more to this stubborn broad’s story than a simple western tale. I’d give this novel 8.5 out of 10 and I’ll definitely be looking into the sequel, She Returns From War.”
– Liam, The Troubled Scribe

“Lee Collins has a winner on his hands with The Dead of Winter!”
– Merikay Noah, Popcorn Reads

“Probably my favorite thing about the book is that its built up slowly, revealing layer after layer of the story …. Certainly a book to enjoy for lovers of westerns and paranormal.”
– Asiye Ivede, Closet Geeks and Slow Mo

“I’m impressed. Very impressed. For a first time author, Collins displays a nice diversity of writing skills, including a unique voice, a solid story, and damaged characters that are both likable and strong. Not to mention an original storyline that throws plenty of punches throughout its course.”
– Matthew Scott Baker, Shattered Ravings

“Cora Ogelsby is a kick-ass heroine and really, we can’t have too many kick-ass heroines can we? Especially when they are nearing retirement and still wielding weapons and killing monsters like nobody’s business!”
Heidi Holzinger, Open Book Society

“Collins has provided us with and entertaining story in an interesting setting … It’s satisfying and entertaining and it avoids feeling like a guilty pleasure. This book is just what the doctor ordered for a cold winter’s day.”
– Cape Rust, Geek Life

“The bottom line is that this is an entertaining horror/western adventure. It’s hard to go wrong with vampires on horseback … I think Lee Collins will definitely become a name to watch out for. You might as well get in on the ground floor.”
– Geonn, Geek Speak Magazine

“The Dead of Winter is an interesting first book from an author who shows lots of promise and is the first in a series that looks to be very entertaining.”
– Mieneke van der Salm, A Fantastical Librarian

“This book was so good – a mix of the action I love, interesting characters, and a few kicks to the emotional gut.”
– Kathy, Kindle-aholic

“The Dead of Winter nails the supernatural part and taken together with the western theme produces a unique story.”
– Jasper de Joode, Fantasy Book Review

“Fans of hunter stories looking for a good Autumn read will devour The Dead of Winter as will fans of the cross-genre blend of western and fantasy.”
– Merriam Jones, Isotropic Fiction

“All-in-all, I’d call this book an entertaining journey through a much more threatening Old West world. If you like Westerns, and you’re into horror, this is totally the book for you.”
– Leah Rhyne

“Cora is a powerful, no-nonsense protagonist, handy with six-gun and sabre, and her character – tortured, hard-drinking, yet tender – gives the novel bite.”
– James Lovegrove for the Financial Times

“a jewel of a novel that reads like a Supernatural episode. It’s a smooth read, full of the western twang and the supernatural lore, and makes you long for more, be it the Supernatural spin-off or a brilliant book like this.”
– Larry Gent, 42 Webs

“Lee Collins marks himself out with his debut that has an eclectic mix of genres and some pretty terrific prose and characterization to dazzle readers with.”
– Mihir Wanchoo, Fantasy Book Critic

“If you’re a fan of westerns and dark fantasy, this may just be the book for you. The Dead of Winter is well written and chock full of great characters and twists and Lee Collins has earned himself a place on my must-read list with his first novel.”
– Jenn, Tynga’s Reviews

“Collins really nails the balance between western and horror in the novel, with the plot moving at a slow boil punctuated by periods of intense action”.
– firebreathingmonsters

“I blazed through this book in record time and found much to enjoy. I’m looking forward to the second novel, which promises to be just as engrossing as the first. The Dead of Winter is a great read for these cold nights as we transition into spring.”
– OwlCat Mountain

“Collins has a really gritty style… The pacing is absolutely perfect, and it doesn’t miss a beat throughout. The action is definitely straight out of the Spaghetti Westerns. All of these great pause moments where the characters eye each other across the square, then a sudden flurry of action, and the dust settles. Brilliant.”
– Ranting Dragon

Other books in Horror, Science Fiction