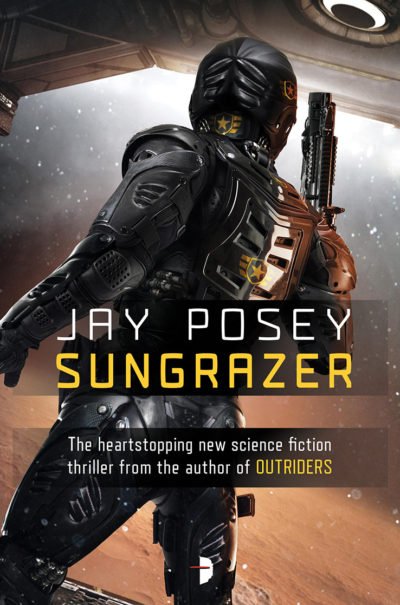 When a fully-autonomous vessel with orbital strike capabilities goes missing, it’s up to the Outriders to track the untrackable. And when the trail leads them to the influential Martian People’s Collective Republic, the operation gets a lot more complicated.

File Under: Science Fiction [ Dead and Alive | The Dark Side of Mars | 301st ISB | Secret Weapon ]

A standalone sequel to Outriders

In a new Cold War between Earth and the colonies on Mars, when devastating weapons go missing, there’s only one team you can call – the Outriders. A crack force of highly specialised super-soldiers, their clone bodies are near-immortal. When a fully-autonomous vessel with orbital strike capabilities goes missing, it’s up to the Outriders to track the untrackable. But when the trail leads them to the influential Martian People’s Collective Republic, the operation gets a lot more complicated…

“Posey has created a wonderfully complex world, filled it with super soldiers and tension between the opposing regimes, and then thrown a spanner into the works to make everything explode.”
– Morpheus Tales Reviews

“Exciting and brilliant…This is the best military SF series I have read.”
– A Book Drunkard

“Fans of series like The Expanse should eat this up, as well as those already familiar with the series.”
– Just A Guy That Likes To Read

“This enjoyable military science fiction adventure about a crack black ops outfit that gets to do all the ‘mission impossible’ jobs, assisted by some scarily effective technical toys, is smoothly written with a nicely twisty plot.”
– Brainfluff

“This is why I read sci-fi books.”
– Purple Owl Reviews

“This is Bond for the modern age and with an ensemble cast.”
– Online Eccentric Librarian

“This military science fiction adventure once more hooked me in with yet another enthralling plot in a story where the stakes aren’t just cities or countries sucked into war and devastation, but planets.”
– SF Reader

“I could hardly put this book down.”
– The Black Elf

“Thrilling, non-stop action in space… you’ll find yourself holding your breath in anticipation as you read.”
– Looking for a Good Book

“A few pages into Outriders and I forgot the book was set in a sci-fi world. Jay nails the mindset and the dynamics of a special operations unit. Keenly written with authentic characters, Outriders was one of the best sci-fi books I’ve read in a long time.”
– Kevin Maurer, author of Hunter Killer and No Easy Day