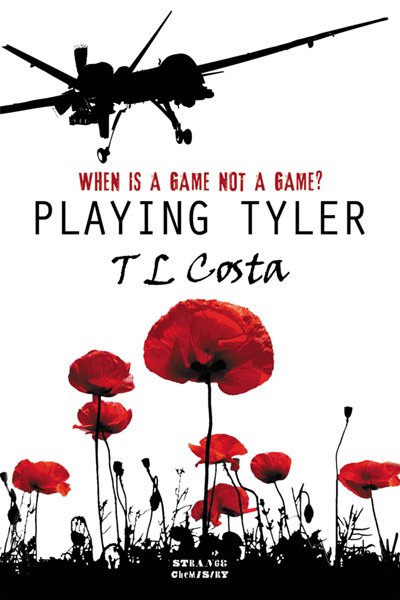 “Fresh. Thrilling. Heartfelt. I’m running out of adjectives, but trust me. You will love this book.”
– Kristan Higgins, NYT and USA TODAY Bestseller author of The Best Man

When is a game not a game? Young Tyler McCandless is about to find out…

When is a game not a game?

Tyler MacCandless can’t focus, even when he takes his medication. He can’t focus on school, on his future, on a book, on much of anything other than taking care of his older brother, Brandon, who’s in rehab for heroin abuse… again.

Tyler’s dad is dead and his mom has mentally checked out. The only person he can really count on is his Civilian Air Patrol Mentor, Rick. The one thing in life it seems he doesn’t suck at is playing video games and, well, thats probably not going to get him into college.

Just when it seems like his future is on a collision course with a life sentence at McDonald’s, Rick asks him to test a video game. If his score’s high enough, it could earn him a place in flight school and win him the future he was certain that he could never have. And when he falls in love with the game’s designer, the legendary gamer Ani, Tyler thinks his life might finally be turning around.

That is, until Brandon goes MIA from rehab and Tyler and Ani discover that the game is more than it seems. Now Tyler will have to figure out what’s really going on in time to save his brother… and prevent his own future from going down in flames.

“T L Costa brings the intrigue of Tom Clancy, technical wizardry of Dan Brown, and the heartthrob of Stephanie Meyer to life in a voice that is entirely her own, one that speaks for the new generation of teenage survivors.”
– Christopher S Nelson

“One part Real Genius and one part War Games, PLAYING TYLER has voice for miles, two damaged yet driven main characters who will simultaneously shatter your heart and send your pulse into overdrive, and disturbing plot twists that could too easily be real. The emotionally riveting prose and genuine relationships draw you in and won’t let go until the final satisfying sentence. Costa is on my auto-buy list from this day forward!”
– A.G. Howard, author of Splintered

“I read Playing Tyler in a state of breathless excitement. The chapters switch between the unique voices of player Tyler and game designer Ani, yet Costa keeps the tension high and the reader wholly engaged with both viewpoints. But I didn’t love Playing Tyler simply because the extremely filmic story kept me on the edge of my seat. In addition to increasing my heart-rate and making me miss the children’s tea, Costa made me laugh and cry. Tyler and his brother, Brandon will remain with me long after I have closed the final page. I miss them already.”
– Bryony Pearce, author of Angel’s Fury, winner of the Leeds Book Award

“Wildly original storytelling that is as authentic as it is engaging. Playing Tyler is one of the best YA books of 2013.”
– Sean Cummings, author of Poltergeeks

“It reveals, if not the truth about the complicated world in which they will soon be living, then the idea that the truth can be hard to find. It suggests that what is right can also be wrong. It prompts the reader to think about the world they live in just a little bit more carefully. It does all this whilst being thoroughly entertaining. Playing Tyler is YA fiction at its absolute best.”
– Robin Brooks, Robin’s Books

“This is a book you have to read, because it doesn’t just hit the spot, it tap dances all over it.”
– Leo Cristea, Jet Black Ink

“Playing Tyler reminded me to open my eyes and be more invested in the world at large. For that reason alone it will stay with me for a long time to come. I wholeheartedly recommend it!”
– D.G., Badass Book Reviews

“Oh my goodness, you guys. This book was absolutely beautiful.”
– Ashley, The A P Bookclub

TL Costa is a graduate of Bryn Mawr College and has a Masters of Teaching from Quinnipiac University and taught high school for five years, before becoming a full-time mom and writer. She has lived in Texas, New York, New Jersey and Spain. Currently, she lives in Connecticut with her husband and two children.