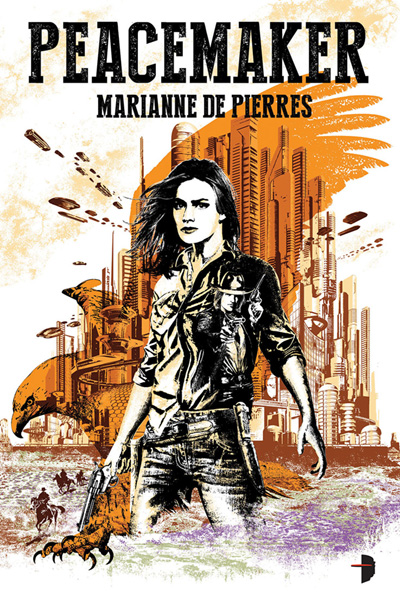 “If you like your thrillers a little on the strange and dystopian side or your dystopias a little on the mythological and crime-solving side, Peacemaker could be the start of a series you’re looking for.”
– New York Journal of Books

Virgin Jackson protects the last natural landscape on earth as a ranger, but her world flips upside down when there’s an impossible murder on the park, and now she’s saddled with a (mysterious and handsome) new partner for the case, as well as facing her own (literally) haunted past.

The First Book in the Peacemaker Series

Virgin Jackson is the senior ranger in Birrimun Park – the world’s last natural landscape, overshadowed though it is by a sprawling coastal megacity. She maintains public safety and order in the park, but her bosses have brought out a hotshot cowboy to help her catch some drug runners who are affecting tourism. She senses the company is holding something back from her, and she’s not keen on working with an outsider like Nate Sixkiller.

When an imaginary animal from her troubled teenage years reappears, Virgin takes it to mean one of two things: a breakdown (hers!) or a warning. When the dead bodies start piling up around her and Nate, she decides on the latter.

“This is the first novel by Marianne de Pierres I’ve read, and I hope to read more about Virgin Jackson and (perhaps) Nate Sixkiller. A fun romp that is much more than the parts which comprise it.”
– Tor.Com”

“Marrianne de Pierres takes  urban fantasy and societal downfall in a unique and intriguing direction. I’m such a huge fan of this author and both her versatility and intricacy in storytelling. Peacemaker is visionary, it’s so different and marries elements that remind me of space opera, with urban fantasy unlike anything we’ve seen before, intermingled with elements of the old Western pulp stories with stunning results.”
– The Conversationalist

“Peacemaker rollicks along at a cracking pace, and I found myself holding my breath in anticipation at times, which is always a good sign! I got to the end of the book and flipped the last page in disappointment, because while the story ended well (albeit definitely set up for the next volume), I simply didn’t want it to stop. Bring on the next instalment!”
– Fablecroft

“Tired of the same old thing when it comes to urban fantasy? Look no further than Virgin Jackson.”
– My Bookish Ways

“I liked a lot about this book. There were plenty of twists, turns, and double crosses… Peacemaker is a good sf mystery for people looking for something a little different. Four stars.”
– Dangerous Dan

“The beautiful thing about Peacemaker is the mystical. Virgin quickly realizes that her world is not what it seems and de Pierres navigates this storyline well. My favorite elements were that of a spirit guide and the facets of many cultures are woven into an investigation. As a nice parallel to the magic element, de Pierres has a strong political subplot. We are able to see the world shaped as anyone who believes in something out of the norm is placed at the fringes of society. De Pierres not only shows us the state of the world she writes in but also what the fictional movers and shakers wanted it to be and where they still want it to go.”
– Literary Escapism

“Peacemaker is definitely a cut above the standard for books of this type: intelligent, witty and with a good heart. If you’re looking for a fast read that surprises and engages, then look no further.”
– The Newtown Review of Books

Marianne de Pierres is the author of the acclaimed Parrish Plessis and award-winning Sentients of Orion science fiction series. The Parrish Plessis series has been translated into eight languages and adapted into a roleplaying game. She's also the author of a bestselling teen dark fantasy series entitled Night Creatures and writes award-winning crime under the pseudonym Marianne Delacourt. She lives in Brisbane, Australia.