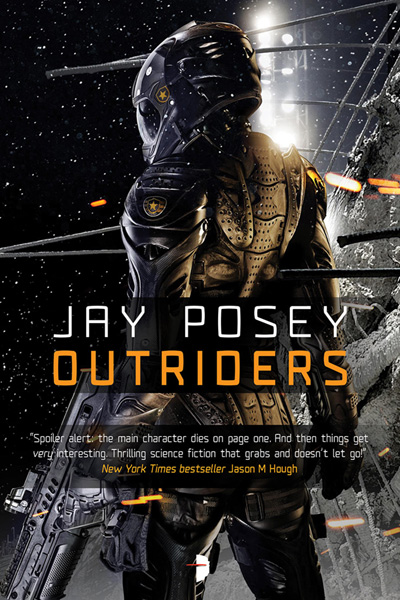 In the far future, an elite military unit called the Outriders execute a mission to avert a terrorist attack. But despite their warnings, the attack goes off unhindered. Triumph becomes tragedy, leaving the Outriders to pick up the pieces and head off a war before it can start.

Captain Lincoln Suh died on a Wednesday. And things only got harder from there. Snatched out of special operations and thrown headfirst into a secretive new unit, Lincoln finds himself as the team leader for the 519th Applied Intelligence Group, better known as the Outriders. And his first day on the job brings a mission with the highest possible stakes. A dangerously cunning woman who most assuredly should be dead has seemingly returned. And her plans aren’t just devastating, they might be unstoppable.

How do you defeat a hidden enemy when you can’t let them know they’ve been discovered? You send in the Outriders.

“A few pages into Outriders and I forgot the book was set in a sci-fi world. Jay nails the mindset and the dynamics of a special operations unit. Keenly written with authentic characters, Outriders was one of the best sci-fi books I’ve read in a long time.”
– Kevin Maurer, author of Hunter Killer and No Easy Day

“Outriders offers up a realistic portrayal of grey world / black ops while doing some nice horizon busting both conceptually and technologically. A highly enjoyable read.”
– August Cole, co-author of Ghost Fleet: A Novel of the Next World War

“With Outriders, Jay Posey announces himself as belonging in the top rank of military science fiction authors. Effortlessly cool and instantly engaging, Outriders is impossible to put down.”
– Richard Dansky, lead writer, Tom Clancy’s The Division

“I literally bit my nails to the quick from the non-stop, mind-bending action and tension – Jay Posey, you owe me new fingernails, but I forgive you that along with the lost sleep. It was well worth every minute of it. This is classic interplanetary outer-space sci-fi in the grand classical tradition and I ate it up! I really can’t wait until Book #2 is ready to read – so get writing already – those are your marching orders, Mr. Posey! And for you sci-fi fans out there, I highly recommend Outriders!”
– Popcorn Reads

“This book should have come with a warning – Attention! Once started this book cannot be put down. An amazing blending of military action & SF. I have rarely encountered a book that I HAD to finish; it kept me up all night. But it was worth it.”
– A Book Drunkard

“I really enjoyed reading this. It was very smooth, and felt more like a conventional spec-ops novel translated into the future…”
– Morning Book Review

“The adventure zipped along at a cracking pace with plenty of tension.”
– Brainfluff

“This was a fun read. Outriders is a story well-balanced between a space opera and military science fiction.”
– Jerald Nichols

“At the heart of Outriders is a thriller with bursts of action and a book you begin to read and realise you’ve become so engrossed in that a whole day has passed by without you noticing.”
– Strange Alliances

“People are judged on the content of their character, their actions and choices, not even a little bit on what they look like or who their ancestors were. I hope other authors take note. This is how you do diversity.”
– Reanne Reads

“It read like a good Spec Ops story, but with the added flavor of being set in the future. I look forward to reading more in this series. 5/5.”
– John Purvis

“Jay Posey is stepping up and showing the science fiction community that he is a powerhouse in the genre.”
– Looking for a Good Book

“Posey’s writing is easy, the characters nuanced, and certainly there is a lot to love here as a result. The villains are just as interesting as the good guys and there is definitely a set up for a larger story.”
– Online Eccentric Librarian

“A well-paced action adventure with a pretty badass plot.”
– The Grimdragons

“Outriders is a fun, fast-paced story with plenty of action and interesting characters.  Check it out.”
– Futures Past and Present

Praise and Reviews for Jay Posey:

“Ok, Mr. Posey…I liked the Duskwalker series alot, but now..damnit…now you got me. You reached into the depths of my cobweb and comic book addled brain, took my love for scifi and military action and put it on paper.”
– Shelf Inflicted

“What really drew me to this book was the mix of elements. It’s post-apocalyptic. It’s a western in styling. It’s science fiction–sometimes rather hard science fiction. It’s a bit of a fantasy, too. The blend of fantastical elements with the science fiction ones, which are in turn harnessed to the western post-apocalyptic setting is a matter of brilliance on Posey’s part.”
– On Writing