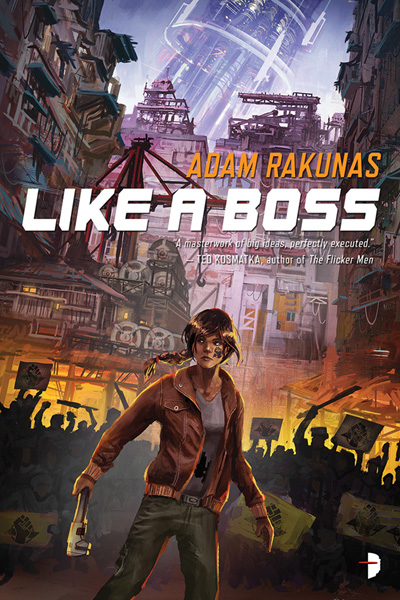 “Like a Boss is one of those rare, perfect novels that somehow packs huge ideas into a story that is simultaneously wildly speculative and completely digestible. Like a Boss lives up to its name. A masterwork of big ideas, perfectly executed.”
– Ted Kosmatka, author of The Flicker Men

Padma Mehta has to save her city, her planet, and Occupied Space from a devastating crop-killing plague – all before Happy Hour.

In this breathless and hilarious follow-up to Windswept, former labor organizer Padma’s worst nightmare comes true: she gets yanked out of early retirement. After buying her favourite rum distillery and settling down, she thought she’d heard the last of her arch nemesis, Evanrute Saarien.

But Saarien, fresh out of prison for his misdeeds in Windswept, has just fabricated a new religion, positioning himself as its holy leader. He’s telling his congregation to go on strike, to fight the system. And unfortunately, they’re listening to him. Now Padma’s summoned by the Union president to help stop this strike from happening. The problem is, she’s out of practice. And, the more she digs, the more she realizes this whole strike business is more complicated than the Union president let on…

“The moment I began reading this, I immediately had to put the book down. I was simply too sick with envy at Adam’s talent.”
– Madeline Ashby, acclaimed author of vN and iD

“Fierce, funny, and fast-paced. This is sci-fi in a world as rich, detailed, and diverse as our own. It’s about fighting for what’s right, about fixing what’s broken, about cheering for the underdog, against all odds. Read it, love it, and then read it again.”
– Ramez Naam, author of the Nexus series

“The story ramps the stakes up gradually, but never seems to stop doing so – and ties the grander global game with a more personal struggle for Padma in a way which makes for an eminently enjoyable read. A cracking read, and I’m looking forward to seeing where Padma and Rakunas  take us next.”
– Sci-Fi and Fantasy Reviews

“Why aren’t there more books about union organizers?”
– Seattle Review of Books

“The series has everything that makes for a scifi classic – a richly imagined world, a plot that is thrilling and thought provoking while successfully commenting on current issues, a diverse well developed cast of characters, and that touch of magic that comes from an author gifted with eloquence and imagination.”
– Stephanie Sasse of Muttcafe.com

“Like A Boss is a laugh-in-your-face rejection of grimdark cynicism and cyberpunk dystopia. It’s a flag-waving, singing-out-loud celebration of people doing the right thing even though it will be hard (and conscious of the cost to themselves), because they know it’s the right thing to do, damn it.  It’s a celebration of hope and trust and community. I loved it.”
– X + 1

“Fast-paced, funny, and full of action. Once again Rakunas writes a winner. Regarding modern science fiction, there is certainly a new voice that needs to be heard.”
– Eyes and Books

“I loved this book.”
– Fed on Peaches

“If you like science fiction adventure with strong characterization and many feels, then buy this book!”
– Bull Spec

Adam Rakunas has worked a variety of weird jobs. He’s been a virtual world developer, a parking lot attendant, a triathlon race director, a fast food cashier, and an online marketing consultant. Now a stay-at-home dad, Adam splits his non-parenting time between writing, playing the cello, and political rabble-rousing. His stories have appeared in Futurismic and the Magazine of Fantasy and Science Fiction.