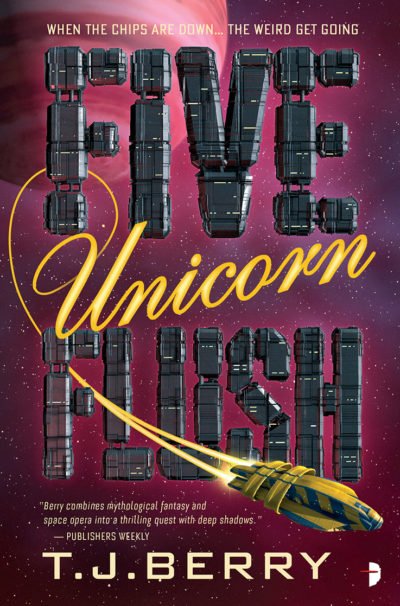 Only one woman with a magical parasite can unite the galaxy, in the mind-blowing SF sequel to Space Unicorn Blues

Reasonspace is in shambles after the disappearance of all magical creatures. Without faster-than-light travel, supply and communication routes have dried up, leaving humankind stranded and starving. Cowboy Jim and his complement of Reason soldiers search for the relocated Bala using the only surviving FTL drive. On their new utopian planet, the Bala are on the brink of civil war between those who want peace under old-fashioned unicorn rule and those who seek revenge on their human oppressors. Only Captain Jenny and her new brain parasite can stop the Reason plan to enslave the Bala again.

“Berry writes enormously fun books. She has a talent for action, demonstrated several times over… Fast, compelling, compassionate, and entertaining as all hell.”
– Locus Magazine

“Berry’s follow-up to Space Unicorn Blues is just as zany and inexplicably touching as her first novel.”
– Amazon Book Reviews

“Five Unicorn Flush is a perfect blend of space opera and high fantasy and includes an incredibly diverse cast of mythological features, from centaurs and unicorns to dryads and dwarves.”
– The New York Journal of Books

“Shut your brain off and go along for the wild ride…Berry deftly creates a diverse and representative universe full of all kinds of magical creatures and humans, a strange, wacky world.”
– LA Times