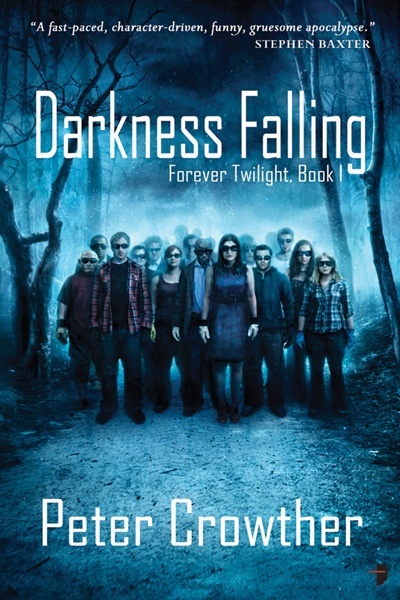 When four employees of KMRT Radio investigate an unearthly light that cuts off communication with the outside world, they discover that something has taken the place of their friends and fellow townfolk, and imbued them with malign intentions.

Little do they know, the phenomenon is not unique to the town of Jesman’s Bend…

“I was reminded of the best of Stephen King. It’s the smartest and most compelling end-of-the-world alien-zombie story I have ever read.”
– Adam Roberts, author of By Light Alone and Yellow Blue Tibia

“This book is told with a sure hand and careful attention to detail; it’s frightening where it should be, sensitive where it should be, and enthralling throughout.”
– Mike Resnick, author of the Starship series, and the John Justin Mallory Mysteries

“Peter Crowther is crafting the first great post-apocalyptic saga of the new century, one that may dwarf even such a benchmark work as The Stand.”
– Lucius Shepard, author of The Golden and Life During Wartime

“Anything that has Pete Crowther’s fingerprints on it is evidence of quality. Snap it up.”
– Joe R. Lansdale, author of the Drive-In series and Bubba Ho-Tep

“As intensely menacing and gruesome as any George Romero film. A virtuoso ‘tour de force’ by Pete Crowther.”
– Ramsey Campbell,  author of The Grin of the Dark and Thieving Fear

“His writing is master storytelling at its finest — gripping, chilling and beautifully told.”
– Sarah Pinborough, author of the Dog-Faced Gods trilogy and The Language of Dying

“…a novel with a fascinating Apocalyptic scenario, full of interesting characters and offering a lot of spine tingling creepiness…”
– The Guilded Earlobe

“LOVED it. I’ve never read anything by Peter Crowther before … but right from the very first page of the prologue I felt like I was meeting an old friend after a long absence. Why? How? Because it’s like this guy is channelling my coming of age book hero, Stephen ‘The Man’ King! It’s uncanny!”
– Silver Thistle

Peter Crowther wrote short stories in the 70s before embarking on a sixteen year career in music and arts journalism and as the head of corporate communications for one of the UK's biggest financial institutions, before releasing his first fiction work for more than a decade in 1990.

Since then he has sold more than one hundred stories, novelettes and novellas to a variety of anthologies and magazines and has had work reprinted in Year's Best Fantasy and Horror (three times), 25 Finest Crime and Mystery Stories (twice) and Year's Best Crime and Mystery Stories. In addition to his own writing, Peter is also a prolific editor of other people's work, served for three years on the Board of Trustees of the Horror Writers’ Association and in 1998 was a judge for the World Fantasy Awards. His PS Publishing imprint has received the British Fantasy Award for Best Small Press seven times while Peter himself received the 2004 and 2008 World Fantasy Award for Best Professional. In fact, since its inception in 1999, the PS imprint and many of its almost 200 titles have picked up almost thirty awards. His first books to be published by Angry Robot - The Forever Twilight trilogy - sees a blinding light engulf the planet. As the light fades to utter darkness, only a handful of survivors remain. That is, until the hordes of vanished humanity begin to return – each one of them changed somehow. Peter lives about five hundred yards from the sea in Hornsea, England with his wife, Nicky – their two sons (Oliver and Timothy) having 'flown the coop' for solo adventures – and several thousand books, magazines, comicbooks, graphic novels, vinyl records and CDs. He enjoys reading virtually anything, but also listens to a lot of music (again virtually anything . . . although he writes only to jazz) and loves watching old b&w movies and re-runs of Sgt Bilko and The Twilight Zone.