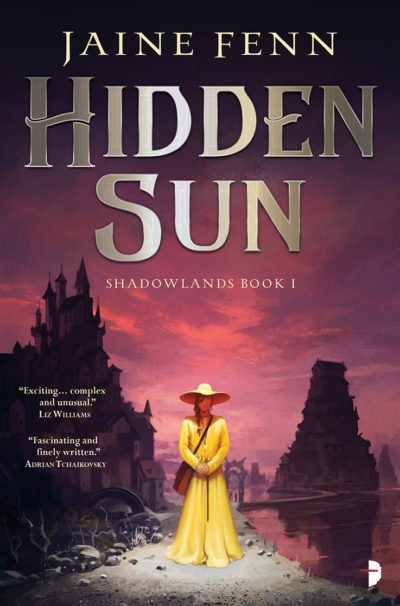 An eccentric noblewoman scientist’s journey into a strange new land will change her world forever, in this enthralling science fantasy novel.

Rhia Harlyn is a noble in Shen, one of the dozens of shadowlands which separate the bright, alien skyland. She has a missing brother, an unwanted marriage proposal and an interest in science considered unbecoming in her gender. Her brother’s disappearance coincided with a violent unsolved murder, and Rhia impulsively joins the search party headed into the skyland – a place whose dangers and wonders have long enthralled her. The dangerous journey brings her into conflict with a young rebel stuck between the worlds of shadow and light, and a charismatic cult leader who believes he can defeat death itself.

“Intriguing world building and complex cultures are a Jaine Fenn specialty, and Hidden Sun takes these elements to the next level. Fenn fans will enjoy this one!”
– Patrice Sarath, author of The Sisters Mederos

“Brilliantly written; an excellent book that I struggled to put down. Hidden Sun draws you into a strange and evocative world, both alien and oddly familiar. Compelling characters, intrigue and weird science there are few authors capable of writing science fantasy this well.”
– Gavin G Smith, author of Age of Scorpio and the Bastard Legion series

“Extraordinary world-building, with a hardcore, violent poetry to the writing. Jaine Fenn continues to be a star of new fantasy.”
– Paul Cornell, author of the Lychford novellas

“An exciting tale of adventure set in a complex and unusual world, filled with strong characters and strange phenomena.”
– Liz Williams

“An entertaining story with fascinating worldbuilding.”
– Liz Bourke for Tor.com

“Hidden Sun is a book which offers a believable and intriguing world in which to journey with the characters.”
– Strange Alliances

“A welcome return to novel writing by a talented author.”
– SF Brum Group

“An intriguing introduction to an interesting world.”
– Purple Owl Reviews

“Hidden Sun is worth reading. It’s interesting and is a good start to what I hope will be a great series. There are so many great possibilities.”
– Vampire Book Club

Other books in Duology, Science Fantasy