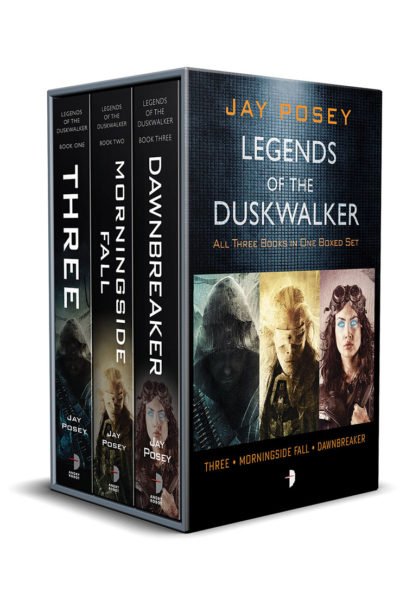 “Stark and powerful, reinventing the post-apocalyptic western as a journey across interior badlands as dangerous as the cyborg-haunted terrain his hero must cross, Posey has crafted a story that is impossible to put down.”
– Richard E Dansky, author of Vaporware and Snowbird Gothic

Heroes may rise, but all will fall, in the devastating post-apocalyptic SF action series by the author of Outriders.

The world has collapsed, and there are no heroes any more. The cyber-dead Weir have overwhelmed civilisation, and its survivors cling to fragile oases. A traveling gun for hire, named Three, agrees to protect a sick woman on the run with her young son. When they set out to discover a mythical safe zone, they must survive the forces that pursue them, and the creatures of the dark, and uncover something truly remarkable…

In the devastated settlement of Morningside, its governor, Wren, is forced to flee the turmoil engulfing the city. He and his retinue seek refuge at a border outpost, only to find that it has been infested with a vast number of Weir. But these creatures harbour a terrible secret, one that has consequences – not just for Wren – but for the future of the world.

The remainder of humanity believe they can do nothing but wait to be overwhelmed by the Weir and their mysterious leader, Asher. And yet, the arrival of a man named Haiku, seeking the mercenary Three, heralds the return of hope, and that a new hero will rise.

“Stark and powerful, Three is a stunning debut. Reinventing the post-apocalyptic western as a journey across interior badlands as dangerous as the cyborg-haunted terrain his hero must cross, Posey has crafted a story that is impossible to put down.”
– Richard E Dansky, author of Vaporware and Snowbird Gothic

“Jay Posey creates a vivid and mesmerizing world whose characters are so real and so flawed that you’ll recognize them immediately. An unforgettable read.”
– Peter Telep, co-author of the #1 New York Times Bestseller, Against All Enemies

“Gritty action-packed drama so hi-res and real you’ll believe you got something in your eye.”
– Matt Forbeck, author of Amortals and Dangerous Games

“Three feels like the result of tossing Mad Max, Neuromancer and Metal Gear Solid into a blender. If you don’t find that combination appealing, then I do not understand you as a human being.”
– Anthony Burch, writer for Borderlands 2 and Hey Ash Whatcha Playin

“Three is a great start into a new series. The post-apocalyptic world that Jay Posey created in Three is brilliantly constructed, it’s just chock-full of the cool stuff, futuristic gadgets (guns and the like), augmented people and not forget the Weir.”
– The Book Plank

“Three is a post-apocalyptic adventure tale in the vein of The Road Warrior, only with fewer vehicles and a higher tech level and body count… Posey knows how to pour on the tension. 4.5 stars. Now I’ll twiddle my thumbs until the next Legends of the Duskwalker book comes out.”
– Shelf Inflicted

“Three will unplug you! This powerhouse of an apocalyptic read cannot and will not be denied!”
– My Shelf Confessions

“I got hooked on Three within the first few pages and could not put down this thrill ride until I finished it in one hell of a marathon read… Three moves like lightning and it kept me spellbound the entire time. At the same time, characters and the world are beautifully developed, if beautiful can be applied to a deadly, desolate post-apocalyptic world where fighting for your life is a daily occurrence. I am literally counting the minutes until Book 2 is published! In case you haven’t guessed, I highly recommend Three!
– Popcorn Reads

“Morningside Fall is a clever, unexpected take on a digitally enhanced post-apocalyptic world.”
– Never To Be Told

“You never know whether book #2 will be as good as book #1. Rest easy – although Morningside Fall has to take a different tone because of story development I feel its every bit as good as Three and it makes me anxious to read book #3! Mr Posey, I’m ready for the next installment!”
– Popcorn Reads

“The author’s writing style was still as top notch as ever. The characters are setting back out into the waste, and what isn’t fun about seeing people struggle against whatever odds a post apocalyptic world and nasty baddies can throw at them?”
– Not Yet Read

“The overall atmosphere of Morningside Fall was one of tense, edge-of-your-seat terror. Posey knows how to convey suspense, and he put his characters in danger over and over again, which left my pulse pounding and my heart racing. This is science fiction, but like the best SF, it’s also horror.”
– Books, Bones & Buffy

Other books in Omnibus, Trilogy