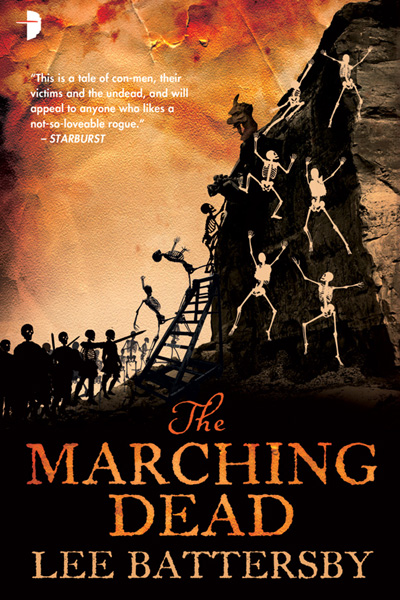 “A stunning debut novel, well-crafted and grotesquely inventive. With its madcap story, unforgettable characters and fine balance between humour and pathos, The Corpse-Rat King ticks all the boxes. Fans of Joe Abercrombie will love this.”
– Juliet Marillier, award-winning author of the Sevenwaters series and Bridei’s Chronicles

The second Marius don Hellespont novel, sequel to The Corpse-Rat King – Marius is back for another run-in with the unsatisfied Dead.

The sequel to The Corpse-Rat King. Find the dead a King, save himself, win the love of his life, live happily ever after. No wonder Marius dos Helles is bored.

But now Keth, his one love, is missing. Gerd has re-entered his life, and something has stopped the dead from, well, dying. It’s up to Marius, Gerd, and Gerd’s not-dead-enough Granny to journey across the continent and put the dead back in the afterlife where they belong. But someone has the dead riled up and spoiling for a fight, and now the dead are marching.

“Battersby absolutely nails the narrative style, balancing humour and horror, fantasy and felony. It’s another quick-moving, well-written story that amuses, excites, and concludes with some rather deep, and remarkably heavy musings on the subjects of life, death, and the afterlife – or the lack thereof.”
– Bob Milne, Beauty in Ruins

“With this sequel, Battersby kicked up everything I loved about the first novel by a notch or two – world-building, storytelling, hilarity, and most of all, characters who just made me punch the air over and over again, usually while laughing.”
– Kate Of Mind

Praise for The Corpse-Rat King

“The Corpse-Rat King is rugged, muscular fantasy, sure to please those who like their adventures rough around the edges, with wit and style to burn.”
– Karen Miller, author of The Innocent Mage and the Godspeaker trilogy

“One of the best books of 2012, nailed on. Brilliant.”
– Steven Savile, author of London Macabre, Black Chalice and many more.

“This is a tale of con-men, their victims and the undead, and will appeal to fans of Scott Lynch or Mark Lawrence, or anyone who likes a not-so-loveable rogue.” 8 out of 10.
– Ed Fortune, Starburst Magazine

“If you had a wish list every time you read a book – great characters, story, pace, writing – that you ticked off every time you came across one of them, you’d soon wear out your pencil while reading The Corpse-Rat King.”
– Katy O’Dowd for The British Fantasy Society

“…the last three-fourths of this book are beyond spectacular. Lee Battersby definitely saved the best for last in this unforgettable tale of death, dead things, and more awesome dead stuff.”
– Liam at The Troubled Scribe

“This was a novel that I thoroughly enjoyed and will gleefully recommend, without reservation.”
– Bob Milne, Beauty in Ruins

“The Corpse Rat King is fast, furious, and Fun. In a genre that can so often take itself far too seriously it’s a hugely refreshing read. Battersby is a wonderfully fresh new voice.”
– Zoe Oliver, Fantasy Bytes

“The Corpse-Rat King is the very definition of a great story; the perfect concoction of old world fantasy, intrigue, adventure and full-bodied characters that sweep you deeper into the story with each turn of the page.”
– Greg Chapman, Thirteen O’Clock

“This book was outstanding! The author, Lee Battersby should be proud to have written such an amazing masterpiece of imagination, sarcasm and fantastic inventiveness”
– Melinda le Baron, Melinda’s Bibliophile Blog

“The Corpse-Rat King is different enough to appeal to most readers while the engaging, intelligent and wildly different narrative should keep any reader glued to the pages, a brilliant début from a promising talent.”
– Ant, SFBook.com

“I like my humor like I like my chocolate… dark. The Corpse-Rat King gave me plenty of those laugh out loud moments. I could imagine the main character played by Bruce Campbell. The story marched along at a fast pace with plenty of gags.”
– Barry Huddlestone, Gnostalgia

“If you’re looking for an interesting new voice in fantasy and an entertaining read, look no further than Lee Battersby and his debut The Corpse-Rat King.”
– Mieneke van der Salm, A Fantastical Librarian

“A very unusual and inventive examination of the age old fantasy and mythology staple, the Realm of the Dead”
– Gav at Mass Movement Magazine

“There are a lot of things to like in this debut novel from Battersby. If you are into weirdness and / or reprehensible knaves, I think you will get a real kick out of this story.”
– Ryan Lawler, Fantasy Book Review

“The Corpse-Rat King is an absurd and fantastical tale of a man about to learn the error of his ways the hard way.”
– Hannah Mariksa, My Book Journey

“A word about a part of this book that I really appreciate in books, it’s its humour: impertinent, pungent and grotesque found throughout the story. Whether in dialogue or in situations, there is always something to smile or laugh. This is not just a book of undead (or living dead for Marius) but a true adventure book, funny and epic. I give it 4/ 5.”
– Vanessa S Bookshelves

Lee Battersby was born in Nottingham in 1970, departing from a snow-covered city in 1975 directly to a town on the edge of Australia's largest desert. In November. He's only just now beginning to recover from the culture shock. He doesn't like to take credit for it, but there's nothing to suggest that Angry Robot would have set up shop in town only a mere 30-odd years later had he stayed. Lee is the author of over 70 stories in Australia, the US and Europe, with appearances in markets as "Year's Best Fantasy & Horror", "Year's Best Australian SF & F", and "Writers of the Future". A collection of his work, entitled "Through Soft Air" from Prime Books. He's taught at Clarion South and developed and delivered a six-week "Writing the SF Short Story" course for the Australian Writers Marketplace. His work has been praised for its consistent attention to voice and narrative muscle, and has resulted in a number of awards including the Aurealis, Australia Shadows and Australia Sf 'Ditmar' gongs. He lives in Mandurah, Western Australia, with his wife, writer Lyn Battersby and an increasingly weird mob of kids. He is sadly obsessed with Lego, Nottingham Forest football club, dinosaurs and Daleks. He's been a stand-up comic, tennis coach, cartoonist, poet, and tax officer in previous times, and he currently works as Arts Officer for a local council, where he gets to play with artists all day. All in all, life is pretty good.