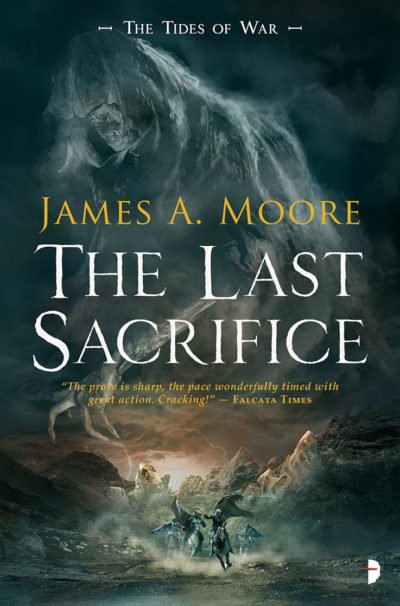 A powerful man defies the gods themselves in order to save his family from being sacrificed to divine whims.

File Under: Fantasy [ Hunted by the Gods | A Great Refusal | By Land and Sea | The Ultimate Sacrifice ]

Book one in the Tides of War series

Since time began the Grakhul, immortal servants of the gods who choose who lives and who dies when it comes time to make sacrifices to their deities, have been seeking to keep the world in balance and the gods appeased. When they take the family of Brogan McTyre to offer as sacrifice, everything changes.

Brogan heads off on a quest to save his family from the Grakhul. The decision this time is costlier than they expected, leading to Brogan and his kin being hunted as criminals and the gods seeking to punish those who’ve defied them.

“The Last Sacrifice is an enthralling fast-paced book with ass-kicking characters who could only grow stronger as the series progresses.”
– Zirev

“James A Moore throws in elements of horror, dark fantasy, low magic and some amazing world-building into this boiling mix that somehow seems to work. Spinning off the staid old genre story-lines into a new direction with this epic take on God versus Man, The Last Sacrifice is a solid start to the sordid grim-dark tale documenting the end of a bleak violent world.”
– Fantasy Smorgasbord

“The Last Sacrifice will tickle the fancy of any fans of Grimdark fantasy, with its large cast of characters and earth-shattering consequences.”
– The Warbler Books

“Fantasy lovers will enjoy this book, and while an emphasis on gritty storytelling and horror elements elevates this from more standard magical creatures or hocus-pocus, it is still an absolute page-turner.”
– LeftLion

“James A Moore dove into the new series with his unique sense of characters, and built up the story to achieve new concepts while taking elements from some other subgenres to enrich the experience for his readers.”
– Fantasy Faction