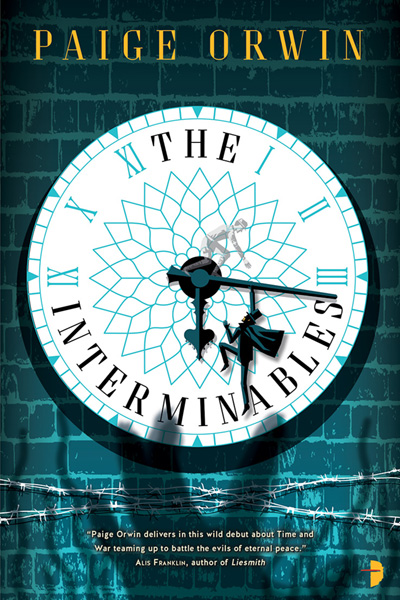 “[A] wild debut about Time and War teaming up to battle the evils of eternal peace. By the time you’re done you won’t fear the reaper; you’ll want to wrap his lonely, cross-stitch obsessed self up in a hug and never let go.”
– Alis Franklin, author of Liesmith

A buddy-cop novel about a wizard who steals time, the war who loves him, and kaiju. The pair are trying to set up a new cabal as society is re-building, but a powerful fortress and arcane powers stand in their way.

File Under: Fantasy [ After the Cataclysm | Thief and Surgeon | Your Best Nightmare | Haunting the Ghost ]

“Vivid worldbuilding of a fascinating alternate Earth, peppered with touches of whimsy.
This is a promising debut!”
– Emmie Mears, author of the Ayala Storme series

“The Interminables is the type of book that Angry Robot was made for.”
– Strange Alliances

“Magic in the modern world is always a fun trope.”
– The Verge, best SFF books to check out in July

“So fucking good.”
– The State of Blogendorff

“The Interminables by Paige Orwin is a unique, sometimes challenging read that really grabbed my attention.”
– Looking For a Good Book

“The Interminables is a type of science fiction/fantasy that I love. It doesn’t dwell too much on the how’s of the situation, but jumps head first to the what’s, who’s, and why’s of the story.”
– The Help Desk

Paige Orwin was born in Utah, to their great surprise. At the age of nine they arranged to rectify the situation.  They now lives in Washington state, next to a public ferry terminal and a great deal of road construction, and has never regretted the decision. They are the proud owner of a BA in English and Spanish from the University of Idaho, which thus far has not proven terrifically useful for job prospects but they knew the risks of a humanities degree going in. They also survived the 8.8 Chilean earthquake in 2010, which occurred two days after their arrival in the country (being stubborn, they stayed an entire year anyway). They began writing The Interminables when her favorite video game, City of Heroes, was shut down in late 2012. Their partner in crime wants a cat. This, thus far, has not happened.