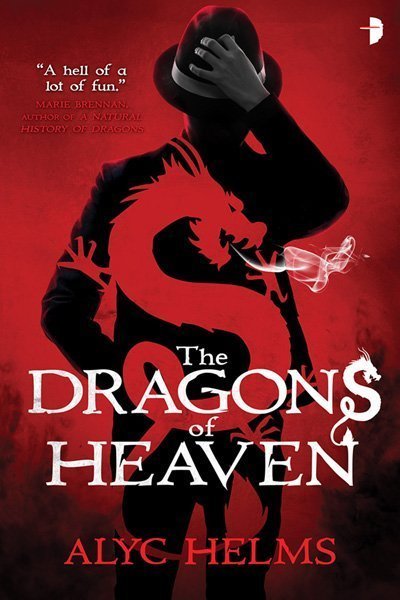 In order to assume the guise of her grandfather, the legendary Mr Mystic, Missy Masters decides to repeat her grandfather’s path and study under Lung Huang, a powerful immortal. Missy becomes embroiled in a romance with Lung Huang and the mystical world of the guardians of China.

“All the fun of pulp adventure, filtered through a twenty-first century lens. Helms isn’t content simply to play in the genre; she questions it, complicates it, adds layers it didn’t have eighty years ago. Missy’s journey to become Mr. Mystic isn’t the usual heroic training montage – but it’s a hell of a lot of fun.”
– Marie Brennan, author of A Natural History of Dragons

The First Book in the Dragons of Heaven Series

Street magician Missy Masters inherited more than the usual genetic cocktail from her estranged grandfather – she also got his preternatural control of shadow and his legacy as the vigilante hero, Mr Mystic. Problem is, being a pulp hero takes more than a good fedora and a knack for witty banter, and Missy lacks the one thing Mr. Mystic had: experience. Determined to live up to her birthright, Missy journeys to China to seek the aid of Lung Huang, the ancient master who once guided her grandfather.

Lung Huang isn’t quite as ancient as Missy expected, and she finds herself embroiled in the politics of Lung Huang and his siblings, the nine dragon-guardians of creation. When Lung Di, Lung Huang’s brother and mortal enemy, raises a magical barrier that cuts off China from the rest of the world, it falls to the new Mr Mystic to prove herself by taking down the barrier. But is it too great a task for a lone adventure hero?

“A tough, witty young woman who inherited her superhero grandfather’s powers barrels through a rollicking Big Trouble in Little China-esque tale filled with magic, monsters and wisecracks. I loved it.”
– Alex Bledsoe, author of The Hum and the Shiver

“In her first novel The Dragons of Heaven, Alyc Helms explores various San Franciscos (the city as it is, was, and looks to passing tourists), as well as the creatures different cultures and their myths collectively call “dragons”, with an emphasis on the Chinese version. Helms keeps this complicated mix of genres, worlds, and eras (modern, historic, mythic) in balance and in motion throughout the book, leaving me eager for more.”
– Farren Miller, Locus magazine

“The Dragons of Heaven combines superheroes, romance, ancient mythological China, and does it right. The world-building is stunning, and Missy’s challenges feel incredibly real as do her reactions to amazing worlds she’s put in. In fighting against the machinations of overly honorable yet incredibly nefarious ancient dragons, its clear she’s the best chance humanity’s got.”
– Cassie Alexander, author of the Edie Spence series

“The Dragons of Heaven is a fun read. It is a genre blend that combines urban fantasy with folkloric myth, the superhero comic, romance, and the complex family dynamics featured in ‘mainstream’ fiction. There is magical action driving the plot aplenty, there are moments of humor and pop culture reference. But there are also great doses of introspection, of character development for Missy, and deep themes at its core.”
– Skiffy & Fanty

“If you are looking for a fresh urban fantasy with superheroes, Chinese folklore, realistic heroine and a great story, then you must try it out!”
– Bookworm Dreams

“The Dragons of Heaven straddles the divisions between mythology, pulp adventure, superhero comic, and bathetic tragedy. The Dragons of Heaven is fun. It’s a mashup of epic genres. It’s an action-packed romance spanning decades and continents. Recommended for fans of Jack Burton, Astro City, and Tea from an Empty Cup.”
– The Dinglehopper

“If you want a book that is fun, funny, action-packed, thrilling, a bit romantic and sexy, joyful, whip-smart, and a good romp, The Dragons of Heaven really should be up your street.”
– Bastian’s Book Reviews

“If you liked John Carpenter’s movie Big Trouble in Little China, if you like the slightly-more-skeptical view of caped heroes that is in vogue right now, and if you like dragons, I encourage you to read The Dragons of Heaven. Check your disbelief at the door, and prepare to be entertained.”
– Fantasy Literature

Alyc Helms fled her doctoral program in anthropology and folklore when she realized she preferred fiction to academic writing. She dabbles in corsetry and costuming, dances at Renaissance and Dickens fairs, gets her dander up about social justice issues, and games in all forms of media. She sometimes refers to her work as “critical theory fanfic,” which is a fancy way to say that she is obsessed with liminality, gender identity, and foxes. She’s a freelance game writer and a graduate of Clarion West, and her short fiction has appeared in Beneath Ceaseless Skies, Daily Science Fiction, Crossed Genres, to name a few.