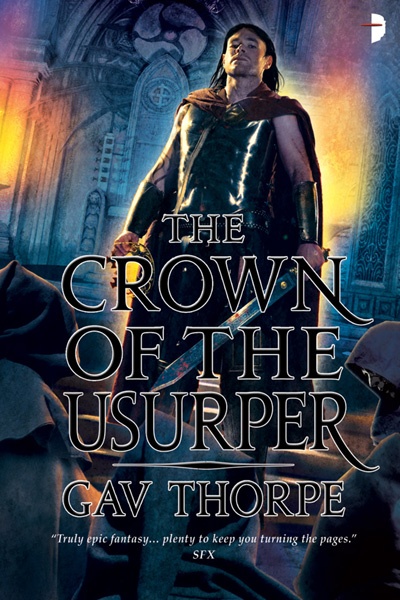 The Crown of the Usurper

The stunning conclusion to the epic Empire of the Blood trilogy.

File Under: Epic Fantasy [ A Time to Decide | Field of Honour | Grandstanding | Demons and Kings ]

The Third Book in the Empire of the Blood Series

The stunning conclusion to the epic Crown of the Blood trilogy.

Ullsaard rules the known world. All are subject to his will.

Yet even as another king bows before him, there are those who would wrench his empire from beneath him. He must risk losing the lands he has conquered to confront a foe far more powerful than any he has faced before.

As alliances shift and old enemies return, will he save the empire he has given his life to, or let it fall to ruin?

Praise and Reviews for the Empire of the Blood trilogy:

“I tore through The Crown of the Blood in one long sitting… This is a properly high fantasy world – rock people, dark sorcery, landships, riding panther and (of course) dinosaurs – but all of it is introduced naturally and casually… his book is hairy, gory, sweaty, shameless… and perhaps even a little bit thoughtful.”
– Pornokitsch

“This is one of Thorpe’s best novels. The setting and story are well thought out and are remarkably logical for a fantasy novel. If you enjoy military or historical fiction, you will enjoy The Crown of the Blood. Action, intrigue, conquest, and charismatic generals are waiting for you here!”
– James Atlantic Speaks

“The Crown of the Blood is an old-fashioned sword and sorcery romp. There’s not a great deal of sorcery, but there’s lots of fighting and plotting and planning to conquer… it’s a fun book. This book is for readers who want a blast from the past; who want their hour of adventure in a strange world.”
– Gillian Polack

“The Crown of the Blood should really have a warning sticker on the front (Angry Robots take note) it’s one of those books that are almost impossible to put down, so much so that you find yourself unconsciously continuing to (try to) read after geeting up to make a brew / go to work / go to bed (delete as applicable and don’t try this at home kids). The novel also stands out with a very strong opening scene and excellent end, with a genuinely unexpected twist.”
– SFBook.com

“Well written, cunningly plotted and above all else a combat story of survival that shows that Thorpe is more than prepared to slaughter a world to establish his own rule. Great stuff.”
– Falcata Times